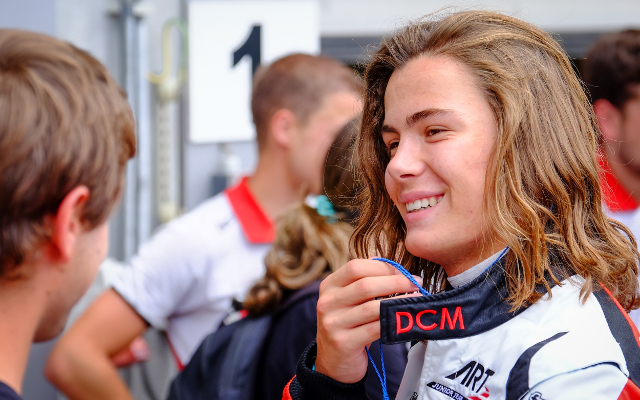 After topping the times on Wednesday, the ART Junior Team driver – who was fourth and top rookie in this year’s NEC – lowered his best to a 1m54.843s during Thursday morning.

He was slower in the afternoon, but a 1m54.989s was still good enough to top the session by three tenths.

?We have been able to work in several areas to improve,” the Belgian said.

“While the others were closer compared to yesterday, I am very pleased with my last lap on new tyres.”

Closest during the morning, as on Wednesday, was MSA Formula champion Lando Norris with Josef Kaufmann Racing, just over a tenth down on Defourny.

French Formula 4 runner-up Sacha Fenestraz was third for Tech 1, and in the afternoon he beat Norris to second place.

?Being able to compare myself with Defourny gives me a good idea as to where I am,” said the French-Argentinian driver.

“He was very fast today and I did my best although I did lose time in the final hairpin and chicane. I learned so much, but there is still a lot to take in during the upcoming test days.

“To be ahead of drivers like Norris and Daruvala is also a positive point and reassuring heading into 2016.?

Force India protege Jehan Daruvala took fourth in both sessions in the other “amazing” Kaufmann car, and Cram driver Vasily Romanov was twice fifth, although the duo were tied on the same time in afternoon.

In the morning, Darius Oskoui took sixth for Tech 1 ahead of JD Motorsport’s Alexey Korneev and Kiwi karter Marcus Armstrong, with the top 10 completed by James Allen (JD) and Gabriel Aubry (Tech 1).

Fast 15-year-old Armstrong was sixth in the afternoon, just over half a second down on team-mate Defourny on both occasions.

James Munro to do 2016 Toyota Racing Series with Giles team