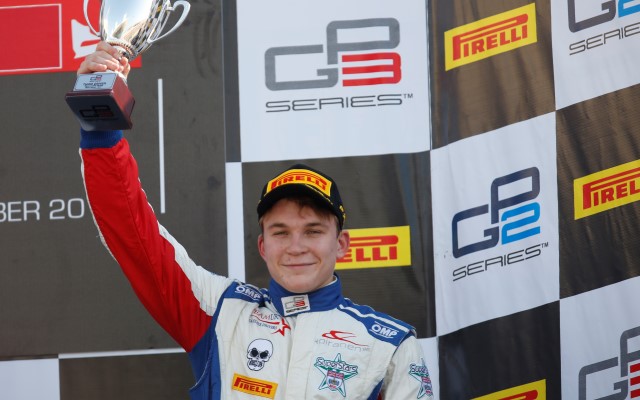 GP3 driver Matt Parry will remain with the Koiranen team for his second season in the series in 2016.

The Cardiff-born driver raced with the Finnish-run squad this year as he stepped up from Formula Renault 2.0.

He scored three podium finishes – at Silverstone, the Hungaroring and in Bahrain – and finished eighth in the standings, making him the highest-placed rookie from below European Formula 3-level.

Parry did sample rival team Trident on the opening day of the recent Abu Dhabi test, but remaining with Koiranen gives him some continuity, even though the series introduces a new car for 2016.

?I can skip the part where driver and team have to get to know each other and get straight down to work,? explained Parry, who turns 22 in January.

?GP3 lived up to my expectations as a very competitive series, but already knowing what each of us require should allow for a flying start once the 2016 campaign gets underway.

?Having completed the 2015 season, I am now familiar with all the circuits we race on, so that will also give me a head-start on what I hope will be a tilt at the championship title.

“We don?t know who else is returning from the 2015 season, but I can?t worry about that. I know what I am capable of with the Koiranen team, and we both look forward to turning that into race wins and a lot of points second time around.

?The championship title can be my only goal for 2016 and I am already looking forward to getting my head down and working towards that.

“Getting this deal sewn up so early means that we are already ahead of the field and I intend for it to stay that way.?

Parry, won the Intersteps and FR2.0 NEC titles in 2012-’13 as a Caterham Formula 1 team junior, is the third driver to be confirmed for GP3 next year but the second from Koiranen, with Matevos Isaakyan also staying at the team after making his debut in Bahrain.

Parry’s fellow Britons Jack Aitken and Jake Hughes also tested with Koiranen in Abu Dhabi having raced for the squad in FR2.0 this year, as did Petronas-backed Malaysian Nabil Jeffri.

GP3 teams can run up to four cars next year.