Matevos Isaakyan to stay on in GP3 with Koiranen in 2016 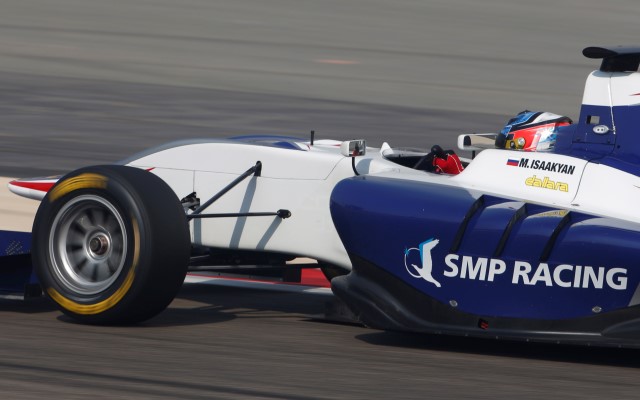 Matevos Isaakyan will continue competing in GP3 with Koiranen next year after contesting the final two rounds of 2015.

Koiranen announced the deal among details of its 2016 programme, including withdrawing from Formula Renault 2.0.

Russian driver Isaakyan, who turns 18 next April, stepped up from FR2.0 – where he raced with the JD Motorsport team in 2014-’15 – to do the GP3 rounds in Bahrain and Abu Dhabi last month.

In his debut race he went from 21st on the grid to 10th in four laps before fading and retiring, while he scored points in Abu Dhabi with a ninth place in race one before doing all three days of the post-season test at Yas Marina.

Isaakyan has also tested Formula 3.5 V8, topping sessions at Jerez and Aragon for Pons Racing before making a short-lived return to the category in today’s Barcelona running with Spirit of Race.

He finished third in FR2.0 Alps in 2014 behind Nyck de Vries and Charles Leclerc, while this year he was 10th in the Eurocup and fourth in Alps.

He is a protege of the SMP Racing programme which has had close links to Koiranen, in particular through the SMP Formula 4 championship run by the Finnish-run outfit.

Koiranen has operated in GP3 for the past three seasons, taking a total of seven wins with Aaro Vainio, Jimmy Eriksson and Dean Stoneman.

Testing alongside Isaakyan in Abu Dhabi were the British trio of Matt Parry, Jack Aitken and Jake Hughes who all raced for Koiranen this year – Parry in GP3 – as well as Petronas-backed Malaysian Nabil Jeffri.

Isaakyan is the second driver to be confirmed for the 2016 GP3 season – when a new car will be introduced – after Arden announced Jake Dennis.

Vartanyan and Finnish karting duo commit to SMP F4 for 2016