Maisano pips Stroll to take race one victory at Vallelunga 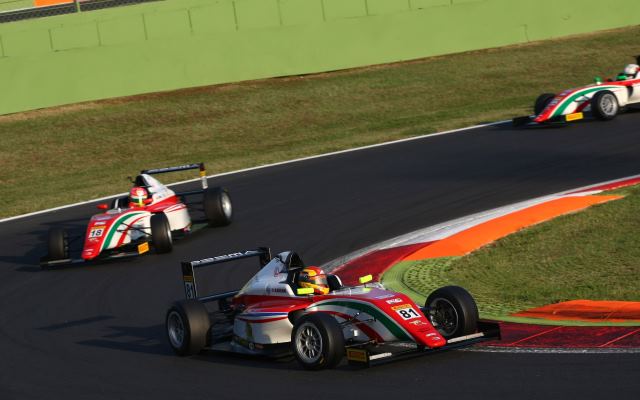 French driver Brandon Maisano held off the advances of teammate Lance Stroll to take his fourth victory of the 2014 Italian F4 season, in race one at Vallelunga.

The 21-year-old Prema driver led from the start, but came under pressure from Stroll later in the race. The Canadian, who moved up from fourth on the grid, tried to find a way through on multiple occasions, but was forced to settle for second ultimately, the gap at the end being under three-tenths of a second.

Takashi Kasai lost out to Stroll early on, but managed to come home third to make it a clean sweep of the podium for Prema. Mattia Drudi pushed Kasai hard for much of the race, taking fourth, ahead of Euronova racer?Leonardo Pulcini making up the top five.

Alain Valente took sixth for Jenzer, losing out to Pulcini on the last lap after being pushed wide, with DAV driver?Joao Vieira coming on top of a race-long tussle with Pulcini’s teammate?Andrea Fontana to take seventh. Cram Motorsport’s?Edi Haxhiu and Keith Camilleri of Malta Racing?rounded off the top ten.

Championship frontrunner Andrea Russo moved up to fifth at the start, but lost his front wing on the first lap, and retired with damage after colliding with Giovanni Altoe.