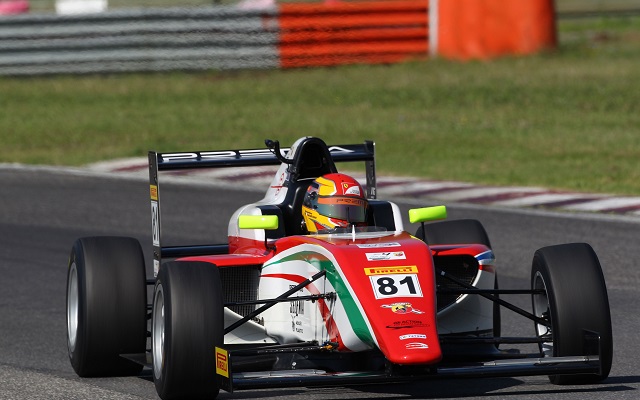 Italian F4 Trophy class leader Brandon Maisano kept his teammate Lance Stroll behind to take his third win of the season in race three at Magione.

The French driver managed to keep the lead from pole, with Stroll remaining in second. Following an early safety car brought out for the stranded car of Matteo Desideri, the Prema duo shortly began to pull away from the rest of the field and, early on, it became evident that the win would not escape the clutches of the Italian team.

Canadian Stroll kept within a second off Maisano for much of the distance and started to put pressure on his teammate in the second half of the race. Having taken more than half of a second out of the Frenchman in the second stint, Stroll tried to find a way past over the closing minutes, but Maisano presented no opportunities, holding on to first.

With Stroll completing a Prema 1-2 – the team’s second this weekend -, Euronova’s Leo Pulcini was best of the rest, completing the podium despite early-race pressure from Mattia Drudi and Andrea Russo.

The latter duo soon became pre-occupied with fighting each other for P4. Diegi driver Russo managed to overtake Drudi on the inside of a curve, but the Adria by Cram driver kept his cool and took the spot back less than ten minutes later. Despite further battling, they finished in that order, with Drudi leading Russo at the checkered flag.

SMP’s Ivan Matveev spent the final laps of the race putting pressure on race two winner Andrea Fontana for sixth, but ended up crashing into the Euronova racer on the last lap. Matveev wound up retiring in the gravel, while Fontana carried the car to sixth, with Alain Valente, Takashi Kasai, Bar Baruch and Edi Haxhiu rounding out the top ten.