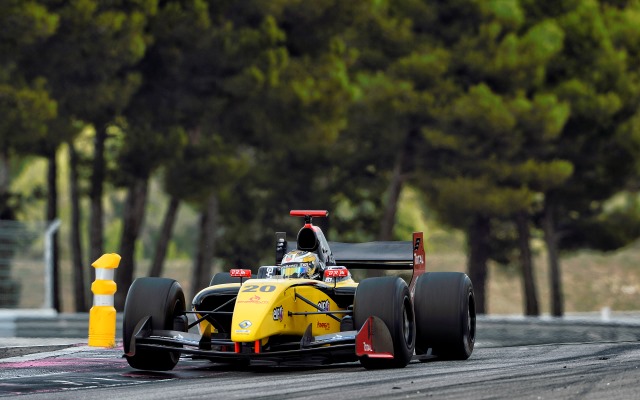 Kevin Magnussen moved a step closer to securing the Formula Renault 3.5 title with a lights-to-flag win in race one at Paul Ricard.

Magnussen kept hold of the lead at the start as chief rival Stoffel Vandoorne was relegated to fourth by Antonio Felix da Costa and Andre Negrao, although the Belgian did manage to work his way back past Negrao a few corners later.

Felix da Costa managed to stay within around a second of Magnussen during the early laps but the Dane pulled away later on, extending his lead to five seconds before easing off to take the chequered flag with a 3.8s margin.

With Vandoorne finishing third behind Felix da Costa, Magnussen’s points lead is now up to 46, meaning he will wrap up the title if he can outscore Vandoorne by five points in Sunday’s race.

Negrao, whose Draco team-mate?Nico Muller stalled at the start of the formation lap, finished in fourth place ahead of Marco Sorensen. Arthur Pic enjoyed a superb opening lap to go from 12th on the grid to sixth by the end of the first tour but he was later re-passed by Will Stevens and Carlos Sainz, only for the latter to go off on the very last lap.

With Pic taking seventh, Nikolay Martsenko claimed eighth ahead of Will Buller, who managed to keep a large gaggle of cars behind him in the closing stages. Daniil Move claimed the final point in tenth.