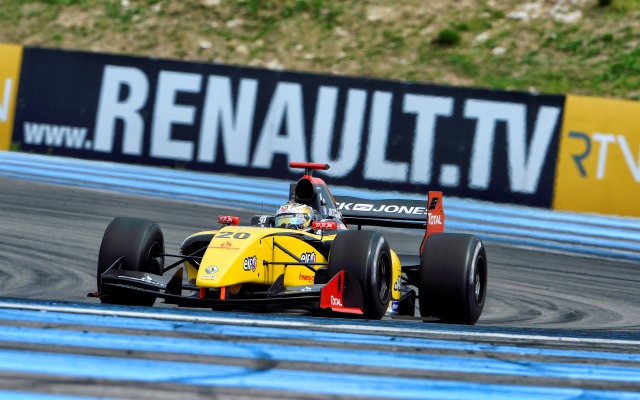 Kevin Magnussen will take a 43 point lead to the final round of the Formula Renault 3.5 Series after a dominant win from pole position in the second Paul Ricard race.

After he was stripped of his race one win for a technical irregularity, Magnussen never looked challenged during Sunday’s race. He made a good start and then set a series of fastest laps to extend his advantage over second-placed Marco Sorensen.

While Sorensen was jumped during the pitstops, Magnussen was able to cruise to a 5.5 second victory.

Nico Muller ran fourth in the early stages after being passed by Antonio Felix da Costa at the start, but he made the most of an early stop to leap into second place. He was then able to pull away from those behind, finishing four seconds clear of Felix da Costa.

Sorensen fell to fifth thanks to a slow pitstop with Nigel Melker holding him off to claim fourth. Mikhail Aleshin was sixth ahead of Arthur Pic and William Buller. Norman Nato was sixth in the opening laps but lost out by being the first to stop, finishing down in ninth. Marlon Stockinger stayed out the latest and finished up tenth.

Stoffel Vandoorne came into the race within 18 points of Magnussen but after starting seventh he slipped to ninth and then struggled with his car after his pitstop, falling outside the top ten and eventually retiring to his garage. With only 50 points available in Barcelona, he needs Magnussen to score no more than eight points to stand a chance of the title.