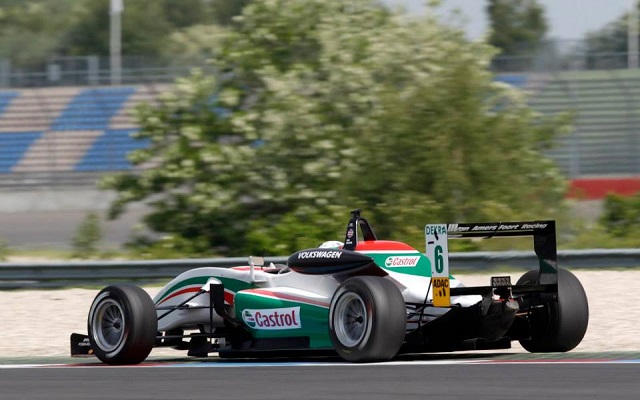 MacLeod was among the few drivers to have a relatively calm and clean race and wound up finishing 14 seconds clear of his nearest rival.

Championship leader Markus Pommer started the race from pole but had a dreadful getaway from the line, dropping to the back of the field as Nabil Jeffri took the lead.

A number of drivers ended up running wide in the first sector, including Nikita Zlobin, who went off from third place and ended up tagging Pommer and several other drivers. Pommer managed to resume, while Zlobin crawled to the pits to retire with a bent suspension. By that point, he was already the second retirement of lap one, as Maximilian Hackl had come to a halt mid-track, bringing out the safety car.

The interruption allowed Pommer to catch up to the field as he lined up seventh for the restart. Jeffri comfortably led at the line when the racing resumed with MacLeod at a safe distance in second.

On lap 10, Jeffri’s victory bid came undone as he appeared to have picked up some suspension problems over the race. The Malaysian slowed dramatically, letting MacLeod through into the lead.

Third-placed Indy Dontje attempted to follow through and wound up bumping into the Petronas-backed driver before making his way around. Jeffri then tried an aggressive move into the following corner and tapped Dontje into a spin before subsequently making his way into the pits and retiring from the race.

The incident allowed MacLeod to establish a considerable advantage out front, with a recovering Pommer sitting in second after battling his way through the field. Nicolai Sylvest held third, while Dontje resumed in fourth place.

The Dutchman soon caught up to Sylvest, who surprisingly began to make up a lot of ground on Pommer, with the latter appearing to suffer suspension damage from his first-lap incident.

Shortly thereafter, Dontje was into third, overtaking Sylvest when the Dane ran wide coming out of the last corner. Pommer, subsequently, did not put up much of a fight, allowing his Dutch teammate to take second.

Sylvest caught up to Pommer on the penultimate lap and encountered little resistance from the German.

As such, it was MacLeod who took his first win in the series, with Dontje picking up second and Sylvest earning his first podium in third.

Pommer slowly nurtured his car to the finish line to take fourth, with Andres Mendez and Weiron Tan rounding out the field.