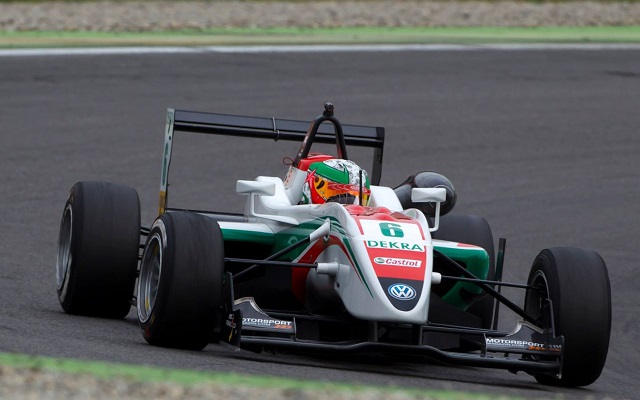 Scotsman Sam MacLeod picked up the second victory of his German F3 season in race two at Hockenheim.

MacLeod’s drive-through penalty in the first race left him on the front row of the reversed grid with Dane Nicolai Sylvest starting from pole.

Sylvest did not get off to a great start, allowing MacLeod to assume the lead early on. The Van Amersfoort Racing driver led by 1.7 seconds over the line after the first lap and continued to methodically set the pace for the entire remaining 12 laps.

The Motopark-operated cars did not manage to gain much ground over the opening laps, with Indy Dontje, Markus Pommer and Nabil Jeffri all stacking behind Sylvest.

The situation seemed custom-made for incidents and, indeed, Pommer and Jeffri wound up colliding on lap five, both subsequently retiring from the race.

Dontje worked his way around Sylvest, who picked up some damage and was handed a black-and-orange flag, effectively ruining his race. The Dutchman then set out after Tan and denied the Malaysian his first podium with an overtake on lap 11.

Out front, MacLeod took the checkered flag almost nine seconds clear of Ferrucci, who secured his first podium in Formula 3 racing. Dontje rounded off the podium, having finished on the podium in ten out of the 11 races of the German F3 season so far.

Tan finished fourth, while Dino Zamparelli had entered the penultimate lap in fifth – only to lose out to Andres Mendez, Nikita Zlobin and Maximilian Hackl during the remainder of the race.