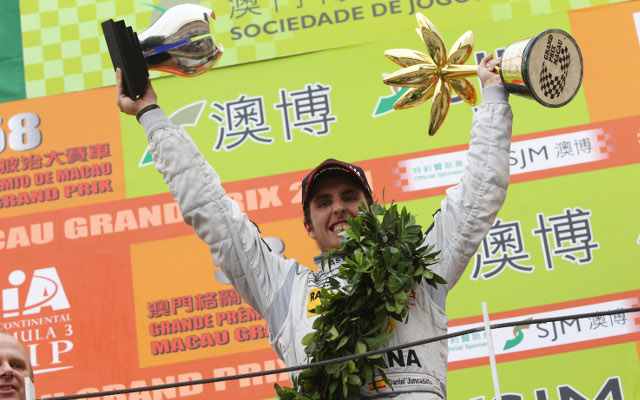 Former European Formula 3 champion and Macau Grand Prix winner Dani Juncadella will return to the category to contest the 2015 running of the prestigious Asian city race with Fortec Motorsports.

The Spaniard replaces Pietro Fittipaldi in the Fortec line-up for Macau. The British outfit’s cars are powered by Mercedes, which Juncadella represented during his F3 career and then in the DTM for the past three years.

He will need to contest the Euroformula Open season finale at his home circuit of Barcelona on 31 October-1 November in order to have taken part in an F3 race this year and thus be eligible for the event that takes place three weeks later.

Juncadella won the Macau Grand Prix in 2011, beating Felipe Nasr and Marco Wittmann. He became European champion a year later, but crashed out of the Macau race.

The 24-year-old has spent the last three seasons competing in the DTM for Mercedes, as well as being Formula 1 reserve driver for Force India in 2014 and taking in GT events this year.

He will be one of two former Macau winners on the entry list that could join Edoardo Mortara as a two-time winner, the other being 2014 victor and this year’s European champion Felix Rosenqvist.