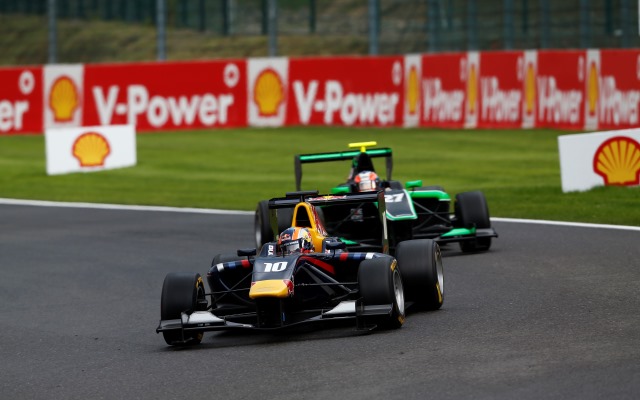 Alex Lynn fought back against an attacking Richie Stanaway to win GP3 race two at Spa-Francorchamps and extend his lead in the championship.

Starting from reverse grid pole position on a damp track, Lynn opened up a margin of over a second on Stanaway but go on to be caught when he made an error at Les Combes, going in too hot and then getting sideways.

Stanaway was able to get past, but Lynn responded into Rivage and muscled his way back into the lead.

Stanaway would close up again one lap later, but Lynn then opened up a 3.5 second lead heading onto the final lap, crossing the line with a two second advantage. The Red Bull Junior’s third win of the campaign more than made up for finishing behind Stanaway in race one, opening his lead up to 32 points – one more than it had been coming into the weekend.

The lead pair quickly pulled away from third-placed Alex Fontana, but the Swiss driver did take the fastest lap away from Lynn on the very last lap as he claimed his first podium since Silverstone 2013.

Jann Mardenborough made a fast start to move up from fifth to fourth and put Fontana under pressure in the opening stages. He would drop back into the clutches of Nick Yelloly, but kept his position to record another fourth place finish.

Lynn’s Carlin team-mate Emil Bernstorff was the man on the move, taking eighth from race one winner Dean Stoneman with a bold early move into Eau Rouge, then seventh from Pal Varhaug when the Norwegian ran deep at La Source and dropped two places. Bernstorff would then take sixth from Dino Zamparelli despite running onto the grass on the Kemmel Straight in his overtaking move.

Zamparelli and Varhaug took the final points on offer ahead of Stoneman, while Nelson Mason scored his first top ten finish in GP3 after passing Kevin Ceccon.

Unable to match his Carlin team-mates, Luis Sa Silva seemed to push too hard at Eau Rouge for the final time, crashing heavily into the barriers at the top of the hill.