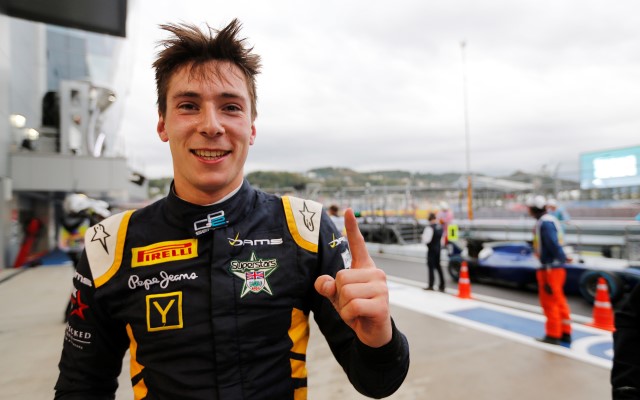 Alex Lynn scored his second pole position in GP2 in a wet qualifying session at Sochi, beating champion-elect Stoffel Vandoorne after a rare error from the Belgian.

The leading order changed throughout the session as laptimes came down, with Vandoorne sitting second to Richie Stanaway with 10 minutes remaining after staying out longer on their first runs.

Vandoorne quickly bettered the American’s time but he in turn was immediately beaten by Lynn by 0.038 seconds.

Two minutes remained, but Vandoorne was held up on his next lap by Marlon Stockinger and another car and so slowed down through the final corners in order to give himself some space for a final lap.

He left it too late to get to the line though, with the clock reaching zero just before he crossed it. That allowed Lynn, who had pitted, to hold onto pole.

Vandoorne can wrap up the title in Saturday’s feature race if he outscores Rossi by six points but with the American qualifying third, that won’t happen if drivers finish the race where they start.

Rossi will share the second row with Gasly, who will be followed on the grid by fellow Frenchman Arthur Pic.

Three weeks after declaring his career over after failing to gain government support, Johnny Cecotto qualified in sixth place, beating his Trident team-mate Raffaele Marciello after the Ferrari protege was baulked badly by debutant Dean Stoneman at the end of his quickest lap.

Stanaway wound up eighth ahead of Norman Nato and Sergey Sirotkin, who marked his home race with his worst qualifying result since Barcelona in May after going off the road several times.

Stoneman matched his practice result of 19th, just one place behind a struggling Mitch Evans.