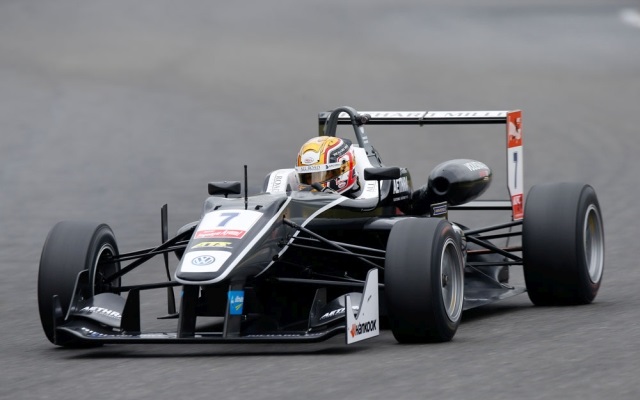 Charles Leclerc collected his third race win of the FIA F3 campaign at Spa-Francorchamps, taking advantage of a heated fight between rivals Felix Rosenqvist and Antonio Giovinazzi to steal the lead in the standings.

Damp conditions welcomed the field at the start but no drivers opted for wet tyres. And although the front row was locked out by Prema duo Rosenqvist and Jake Dennis, it was Giovinazzi?who jumped into the lead after a storming start.

The first laps saw spins for Markus Pommer and Gustavo Menezes but the race stayed green.

The top four of Giovinazzi, Rosenqvist, Dennis and Leclerc managed to build a gap in the early stages and?Rosenqvist quickly reclaimed the lead with a pass on the Kemmel straight. But he remained there for only a handful of laps as Giovinazzi then pulled off an audacious move into Les Combes.

Meanwhile, Leclerc was also able to progress and overtook Dennis, who soon started to lose touch with the top three.

As a result, the battle for the win turned into a three-way fight but for a while the order amongst them remained stationary, with only a couple of unsuccessful attempts from both Rosenqvist and Leclerc.

With three laps to go, however, they all entered Les Combes virtually side-by-side with Rosenqvist trying to make a move on the outside of the corner.

The Swede was forced onto the wet kerb after slight contact with a blocking Giovinazzi, which meant Rosenqvist could not take the turn.

It was the Italian who got the worse of the situation though, as he suffered a puncture and was forced to retire.

As such, Leclerc inherited the lead and cruised to the checkered flag, while Rosenqvist survived in second.

Signature’s Alex Albon and Mucke’s Santino Ferrucci secured third and fourth, having passed the dropping Dennis during the final laps.

Pietro Fittipaldi was eighth ahead of Fabian Schiller, who celebrated his first point-scoring finish of the season, and karting graduate Alessio Lorandi.

Minor incidents aside, it was a return to form for the FIA F3 series after an incident-packed Monza outing, with no safety car appearances or serious collisions this time around.