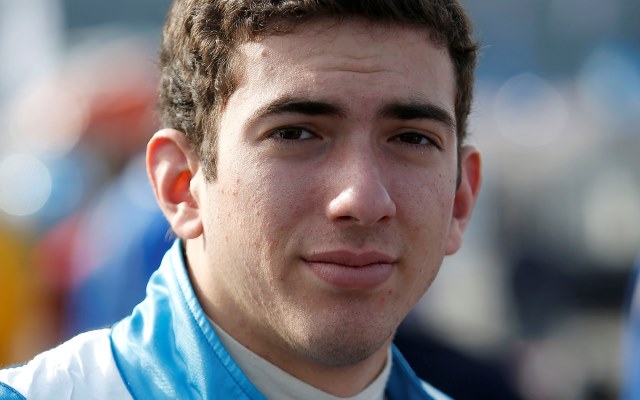 Latifi, 18, made his single-seater debut in 2012 with a season in Italian F3, in which he finished seventh in the standings and secured a victory from reverse-grid pole at Vallelunga.

He started 2013 with ninth in the Toyota Racing Series championship and then took up a rookie campaign in the rebranded European F3 with Carlin. Over the course of ten rounds, Latifi bagged 45 points and wound up 15th in the standings with a best finish of fifth. He also simultaneously contested a campaign in the four-round 2013 British F3 season, which netted him a memorable double pole at Spa and a podium on his way to fifth overall.

The Canadian had initially been expected to stay on with Carlin for a 2014 assault, but managed to instead negotiate a contract with Prema when a seat opened up following the departure of Alex Lynn to GP3.

Prior to the regular season, Latifi has been taking part in the Ferrari-run Florida Winter Series, and has won the first two races of the final round at Homestead.

“I?m very excited to be joining Prema for the 2014 season,” said Latifi, whose career is being guided by Anthony Hamilton.

“I enjoyed some positive days of winter testing with them and felt comfortable in their working environment.? Next year is a very important year for me and I?m confident that with the experience and knowledge of the team, combined with my abilities, we will be consistently challenging up at the front.”

Lynn was one of three race-winners for Prema in FIA F3 2013, alongside Lucas Auer and series champion Raffaele Marciello. This year Latifi will be joined at the Italian outfit by fellow sophomore European F3 driver Dennis van de Laar and newcomers Esteban Ocon and Antonio Fuoco.

?Latifi is definitely a very interesting prospect and we kept a close eye on him as a rival in 2013,” said Prema’s Rene Rosin.

“Despite being a rookie, he showed no reverential awe and it was this kind of fighting spirit that convinced us to have him in our team. We will provide him with all the support he needs to grow up even further. I?m sure he will stay in the top rows of the grid in qualifying and to fight at the front on race day.?