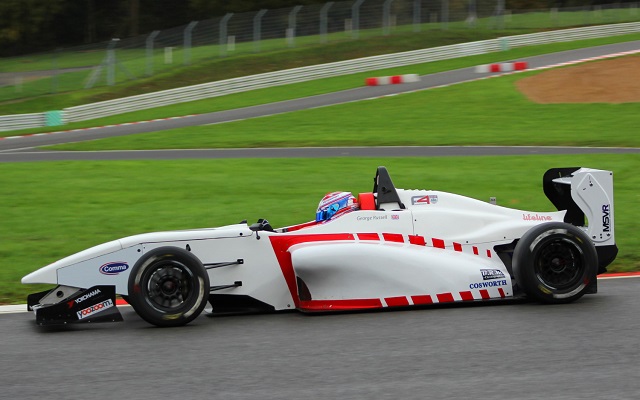 British karting graduate George Russell will join the BRDC F4 field in 2014, having secured a race deal with Lanan Racing.

Russell, 15, enjoyed an illustrious career in karts, with titles in the European KF3 championship, the KF3 Winter Cup, the Super 1 series in the Rotax Mini Max class and other categories.

“I’m absolutely delighted to join the BRDC F4 Championship with Lanan Racing”, said Russell. “To be able to join the current champions is a privilege and I’m confident I can match or exceed their results from last season, and be running at the front in 2014. I’ve had some good seat time with the team already, we work well together and I’m very excited to be making my car racing debut with them. I’m aiming to win the championship in my first year.”

The opening season of BRDC F4 saw Lanan Racing take Jake Hughes to the title, the youngster picking up four wins along the way.

“We’ve been keeping an eye on George’s progress for some time and very pleased to welcome him to the team”, said Lanan team principal Graham Johnson.? “He’s made the step up from karting very quickly and his?performances in testing with us have been absolutely fantastic. He is clearly going to be a championship contender in 2014. We ran consistently at the front in BRDC F4 in 2013 and we were delighted to claim the championship; signing George helps with our plan to do the same in 2014. We are very excited about his potential.”