Kari in control in first race of Sochi weekend 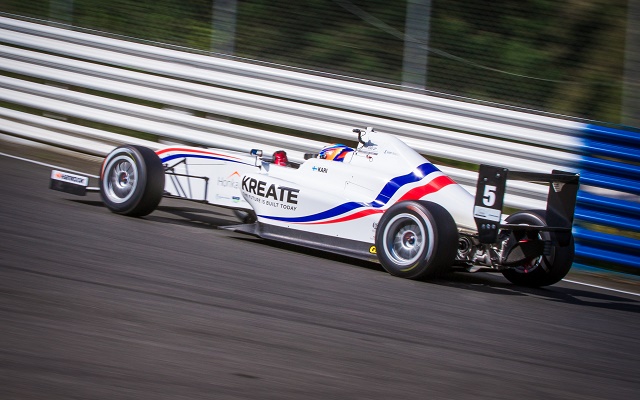 Finn Niko Kari continued to reign supreme over the SMP F4 field at Sochi, easing to victory in race one.

After dominating qualifying, Kari led every lap of the race, taking his second win and his sixth win in seven races.

The only retirement of the race took place even before the start as Nikita Troitskiy, set to start third, pulled over on the outlap.

In his absence, Kari and Alexey Korneev kept the top two spots off the line, while Aleksanteri Huovinen managed a lightning start to assume third.

Meanwhile, Enaam Ahmed, Simo Laaksonen and Nikita Sitnikov all stalled on the grid, but managed to get going again.

Korneev tried to stay in touch with Kari and ended up locking up briefly on lap two, with the Finn on course to establishing a solid lead.

He was four seconds in the clear at halfway before easing off as he cruised to the chequered flag.

Vladimir Atoev, who slipped behind Huovinen at the start, soon re-passed the Finn and began closing in on Korneev, but would have to do with third.

There was a gulf of almost ten seconds between fourth-placed Huovinen and compatriot Niclas Nylund, who overtook both Ivan Matveev and Nerses Isaakyan for fifth.

Laaksonen, 13th after the opening lap, eventually fought back through and also passed the duo to clinch sixth on his series debut.

Isaakyan kept Matveev at bay to claim seventh, with Ahmed and Aleksander Maslennikov rounding out the top ten.

Kari will start the other two races of the weekend from pole position.