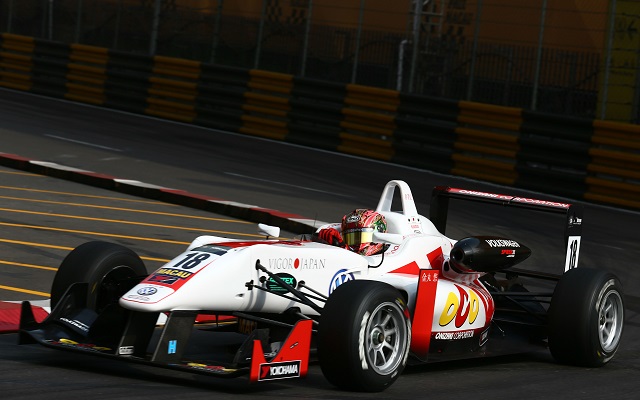 As in 2014, Kanamaru has secured the drive just a week before the event and in place of a British rookie who has been exploring alternatives to Carlin for the subsequent season.

Last year, he took the place of Jake Dennis, who backed out of driving for Carlin in Macau prior to securing a deal with Prema Powerteam for 2015.

On this occasion, he replaces Russell at a time when the 17-year-old has been testing extensively with the new Hitech GP team since the European season ended.

One thing Kanamaru will hope to avoid repeating from his 2014 Macau appearance is the first lap pile-up in the Grand Prix, in which he vaulted up onto the tyre barriers at San Francisco after Tom Blomqvist and Esteban Ocon had tangled over the lead. He had started 13th.

Kanamaru has raced Dallara F3 machinery in Euroformula Open for the past two seasons, finishing fourth last year and third this.

He also entered Formula Renault 3.5 for the final three rounds of the 2015 campaign for Pons Racing and went well, taking a best finish of sixth.

He joins Antonio Giovinazzi, Gustavo Menezes and Callum Ilott in a four-car Carlin assault on Macau, and is the second replacement driver to have joined the field since the initial entry list was revealed at the start of October: 2011 Macau winner Dani Juncadella earlier replaced Pietro Fittipaldi at Fortec.

Lando Norris to do second Autumn Trophy event after turning 16