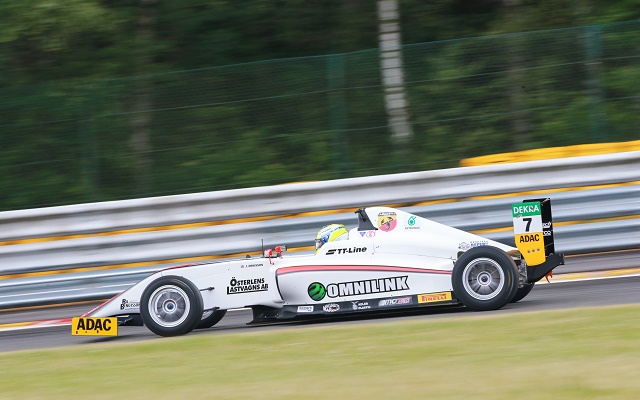 It was Robert Shwartzman who initially started second and kept position over the opening stint of the race.

But, shortly after a crash between Jonathan Cecotto and championship contender Marvin Dienst, Zhou passed Shwartzman, with Eriksson already three seconds in the clear.

That lead was gone when Cedric Piro squeezed Nikolaj Rogivue into the wall into Eau Rouge, bringing out the safety car.

However, Eriksson bossed the restart, taking about half a second per lap out of Zhou.

Behind them, Ralf Aron had overtaken Shwartzman, only for the Russian to retake his spot shortly thereafter. Shwartzman’s teammate Lando Norris, making his ADAC F4 debut, then also worked his way around Aron.

Just then, Harri Newey went off at Les Combes from ninth and appeared to have triggered the fire extinguisher in his car, which forced the Briton to abandon the race.

And Eriksson did just enough to keep his win, pulling out enough of a gap to avoid losing out on the slipstream and taking the checkered flag in first

Zhou claimed second, ahead of Shwartzman and Norris.

Joseph Mawson passed Aron on the final lap to take fifth, while David Beckmann, Janneau Esmeijer and Giorgio Maggi followed the Estonian over the line.

Mick Schumacher, Marek Bockmann and Tim Zimmermann, who had started P32, were all in contention for the crucial tenth spot and reverse-grid pole for race three.

But, as they fought, it was Motopark’s Michael Waldherr who snuck through to take the final point.