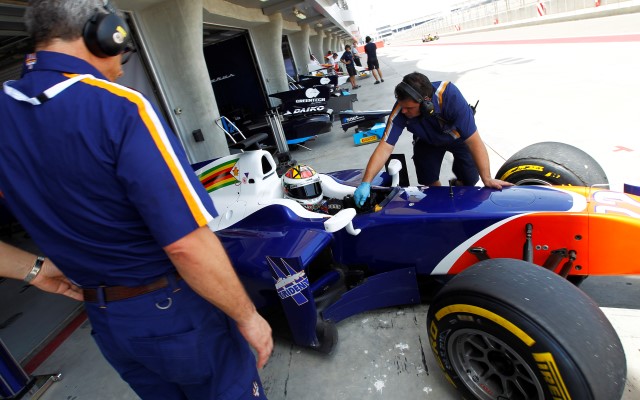 Axcil Jefferies has announced that he will take part in the opening round of the GP2 season with Trident this weekend.

The Zimbabwean tested for Trident in Abu Dhabi last month, and then returned to the cockpit on the final day of pre-season in Bahrain. Auto GP champion Vittorio Ghirelli had taken over his seat for the first two days of the Bahrain test, but the Italian driver has since made his debut in Indy Lights.

19-year-old Jefferies, born in Slough in England, has had a patchy single-seater career so far. He finished third in Formula BMW Pacific in 2009 but did not race regularly again until FIA Formula Two in 2012, where he finished 12th in the points after joining the category at round three. He did two Indy Lights races in 2013, with a best finish of fifth.

At present, Jefferies’ deal with Trident is only for the opening race weekend, and the team has yet to publicly confirm him as their second driver alongside?Johnny Cecotto.

?This is such a great opportunity for me and my country,” he said. “It?s something I?ve been dreaming and focusing on for the last two years, so for it to finally become a reality is one of the best feelings.

“I obviously have goals heading into the weekend, but ultimately I aim to learn as much as possible and soak up all the new experiences that are involved in the GP2 Series. I?m confident we will get something in place for the full season. I would like to express my gratitude to Trident Motorsport for all they have done to assist in making this happen.?

MP Motorsport and Lazarus are the other two teams to have not yet announced a second driver for the Bahrain round. Jon Lancaster and?Conor Daly are favourites having occupied the respective seats throughout pre-season testing.