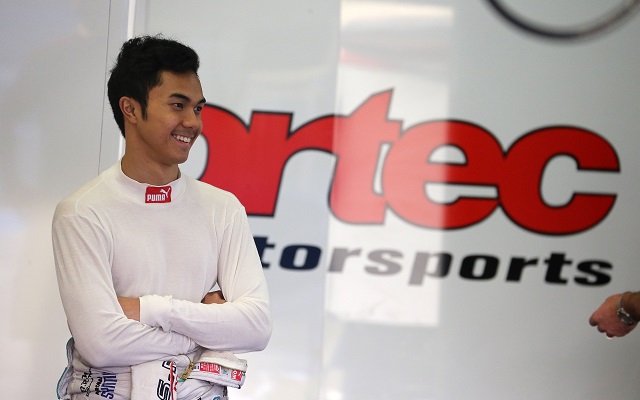 Jazeman Jaafar will race for Fortec Motorsports in his third season in Formula Renault 3.5, it’s been confirmed.

Long supported by Malaysian oil company Petronas, the 22-year-old’s car has been decked out in the colours of the Mercedes F1 Team ahead of the first pre-season test at Jerez that starts on Thursday.

Jaafar’s previous two years in FR3.5 came with Carlin and ISR respectively, improving from 17th place in 2013 to tenth last year. He notched up his first two podium finishes in the Monaco race each season, and then added a third P3 finish at Spa last year.

He tested for DAMS and Fortec at the end of 2014 before securing a deal to race for the latter alongside sophomore racer Oliver Rowland.

His career began in Asian Formula Renault in 2006, and won the Formula BMW Asia title the following year before turning 15. Two seasons in the European series followed before a three-year spell in British F3, culminating in the runner-up spot in 2012 before his move to FR3.5.

“I had a really good test with the team in the winter, settling in really quickly and establishing a good rapport with everyone,” he said about joining Fortec.

“It’s great to be getting back in the car with the team at Jerez this week and I hope that we can have a strong showing and a productive test.

“Having Oliver as a team-mate will be good for me too, as I didn’t have a team-mate last year and he has FR3.5 experience, so I have no doubt he’ll be quick as well.”

Fortec’s Jamie Dye added: “We’ve watched him come through the ranks of the sport and have been impressed with his performance.

“We wanted to sign an experienced FR3.5 Series driver and after a strong test with Jazeman over the winter where he fitted in well and gelled quickly it was good to be able to secure him for 2015.”

The announcement of Jaafar leaves four vacancies on the 2015 FR3.5 grid, two at Comtec Racing who will not be present at the Jerez test.

The vacant seat at Zeta Corse alongside Facu Regalia will be occupied in the test by GP2 veteran Johnny Cecotto, who has expressed an interest in continuing his junior single-seater career in the series.

Joining former Zeta driver Roberto Merhi at Pons Racing in their remaining seat is Philo Armand. The Indonesian has raced in Formula Renault 2.0 for the past two years, scoring a best result of fourth in an Alps series race at Pau last year.

*Testing at Jerez, not confirmed to race