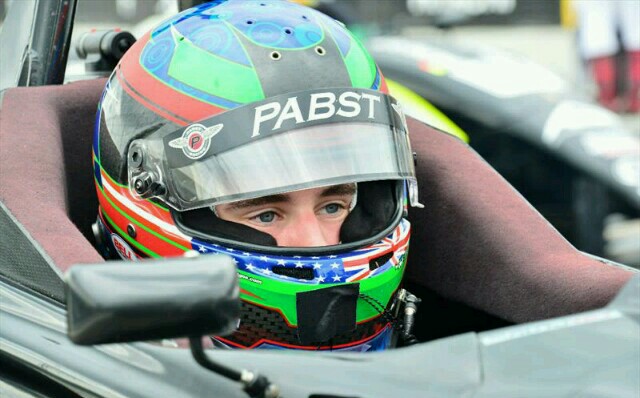 Jake Eidson took the fight back to a red-hot Nico Jamin in the USF2000 National Championship, leading every lap to win the Freedom 75 at Lucas Oil Raceway in Indianapolis.

Eidson, who had scored seven consecutive podium finishes in USF2000 before ending his streak due to front wing damage race two at the Indianapolis Motor Speedway, got ahead of Jamin from the drop of the green flag, passing the pole-sitter on the outside, with last year’s winner?Aaron Telitz settling into third.

Keyvan Andres Soori, another one of only a handful of drivers with prior experience on ovals,?had trouble getting his ArmsUp Motorsports car fired during the pace laps and couldn’t get back to his grid spot in time, but made up almost all of the lost track position in five laps.

By lap 12, lapped traffic was already playing a factor, and Eidson was able to negotiate the slower cars with ease for the entire race, even as Jamin piled on the pressure, getting to within 0.2 seconds at some points. By the halfway mark, Eidson had lapped more than half of the field, and the lead two cars had left Telitz behind.

James Dayson retired with an unknown mechanical failure after running only 44 laps – the only retirement of the race.

With less than 15 laps to go, Eidson caught a six-car group of slower cars, and Jamin sensed the opportunity to close in again and maybe get past Eidson. Once again, Eidson was able to negotiate traffic and hold off Jamin.

A last push from the Frenchman came up just short in the end, and Eidson won after leading all 75 laps – taking his eighth podium finish of the season in nine races and closing the championship deficit to Jamin to 13 points.

Behind Eidson and Jamin, Telitz was third.?Anthony Martin was fourth, the highest-placing oval rookie, ahead of Yufeng Luo in fifth, the last car on the lead lap.?Parker Thompson finished sixth after a long battle with Soori.?Luke Gabin was eighth,?Garth Rickards?finished ninth, and?Max Hanratty?rounded off the top ten.