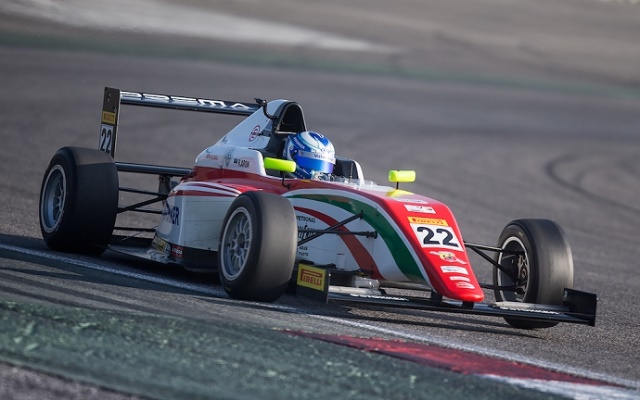 The Estonian becomes the first signing for the Italian team that swept all the titles in the inaugural season of the category last year.

Aron joins the entry-level series with one year of single-seaters under his belt, having competed in two FR1.6 championships with Scuderia Nordica in 2014.

Both his campaigns followed an uphill trajectory as he started out as just a top-ten finisher but transformed himself into a reliable victory contender by the end of the season.

In the Nordic series, he celebrated a shock victory as early as May at Botniaring, and, having missed a few rounds, went on to dominate the final two weekends, claiming four victories in a row.

He finished that season in sixth overall, despite competing in only 11 of the 17 races.

In the NEC series, he took until round four at Assen to score his first podium, but then went on to feature in the top three for the next five races, collecting wins at Assen and Spa. That, combined with his 100-percent finishing record, allowed him to finish the season in second.

He then teamed up with Prema to do the Italian F4 Adria Winter Trophy meeting, winning the first race and finishing runner-up in the second one.

“?I am very excited and happy to be a part of the Prema family,” stated Aron. “I consider it to be undoubtedly the best team in the category and I am sure we can make the best result. I am looking forward to work with such a professional and reputable team as Prema.”

The Italian team, run by Angelo Rosin and closely tied to the Ferrari Driver Academy, were class of the field in the inaugural Italian F4 season last year. Lance Stroll and Brandon Maisano won 13 of the 21 races, with the former winning the main championship and the latter dominating the Trophy class.

“Aron is a very interesting prospect and I’m happy to have him with us,” stated Rosin. “He’s not coming directly from go-kart racing as he already has a one-year experience in single-seaters, where he did really well. So while he still has room for improvement, he can play a major role straight away in the 2015 Italian F4 series.”