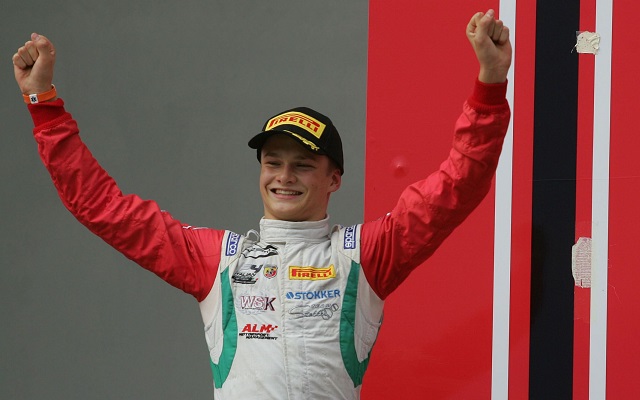 Prema has promoted its Italian Formula 4 champion Ralf Aron into its FIA Formula 3 European Championship line-up for next season.

The Estonian, who turns 18 next March, joins his predecessor as F4 champion Lance Stroll as being announced by Prema for its 2016 F3 campaign.

After taking seven wins in Formula Renault 1.6 across the NEC and Nordic series, Aron won nine times on his way to the Italian F4 title with Prema this year and also picked up a win in the German ADAC championship.

?Continuing our relationship with Aron really seemed like a logical choice for us,” said Rosin, whose team has taken drivers to European F3 titles in each of the last five years.

“After the extremely successful year we experienced together in Formula 4, running really well both in the Italian and in the German series, I was really curious to see him behind the wheel of our F3 machinery.

“He impressed us straight away and even provided technical insight like a seasoned veteran.

“It felt just right to welcome him to our Formula 3 operation and line-up together for a new challenge in 2016.?

Aron added: ?I am very happy to make the step from Formula 4 to Formula 3 and especially with Prema.

“We had a fantastic season together and I am grateful for the opportunity, hopefully I can make them proud again.?

Formula Renault 2.0 graduate Ben Barnicoat had previously been named as part of Prema’s F3 line-up next year (after testing alongside Aron) in a television appearance with Derek Walters from the Racing Steps Foundation.

However, with a deal yet to be formally announced by either party, the Briton is now testing for the Hitech and Fortec teams this week, Autosport reports.

Running alongside Stroll and Aron for Prema at Jerez have been European F3 race-winner Maximilian Gunther and Japanese champion Nick Cassidy, who both had race outings for Prema towards the end of the 2015 season.