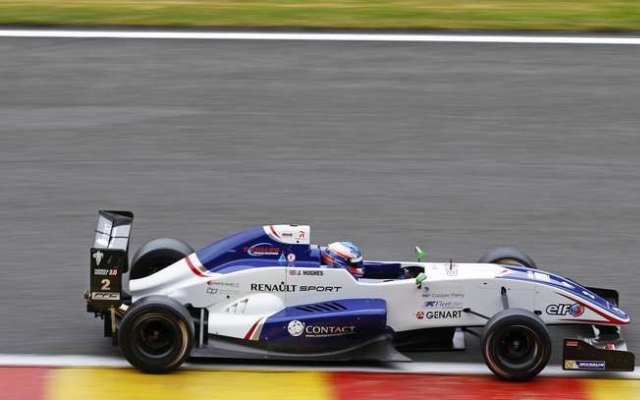 The Koiranen driver switched roles with Ukyo Sasahara for the Sunday running, qualifying as runner-up to steal the lead from the Japanese driver during?the race.

The Briton’s race did not start too promisingly as an aggressive move from Sasahara compromised his getaway, allowing Ben Barnicoat to take second.

However, Hughes soon managed to reclaim the spot and started to close the gap on Sasahara during the final laps. With zero seconds on the clock and one final lap to do, he made a successful pass into Les Combes.

Sasahara had to do with second despite leading the entire race, while Matevos Isaakyan completed the podium, having snuck past Barnicoat at the same time Hughes did.

Jack Aitken fought his way up to seventh from tenth, while Kevin Jorg and Callan O’Keeffe both lost positions throughout the race to end up eighth and ninth respectively. JD’s Thiago Vivacqua completed the top ten, beating local guest Max Defourny.

Race winners in the season opener, Louis Deletraz and Dennis Olsen were both out of contention after a turn one collision initiated by an overly-ambitious move from the Norwegian.

Rowland in control in second Formula Renault 3.5 race at Spa