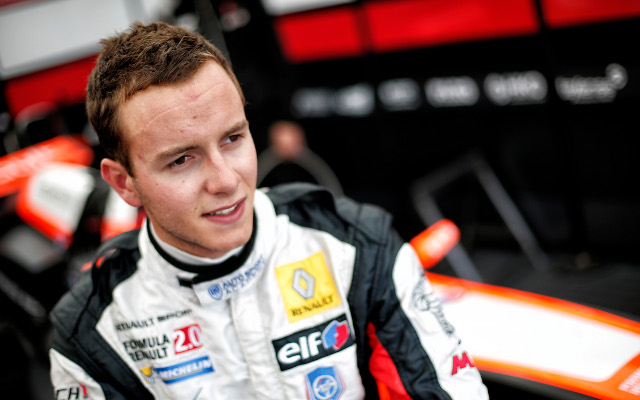 Anthoine Hubert converted pole into victory to score his maiden Eurocup Formula Renault 2.0 win in the third race at Silverstone.

Hubert held the lead off the start and although he was followed closely by Kevin Jorg for the first few laps, Hubert then pulled a gap of over a second, winning by 1.235s.

With second place, it looked as if Jorg would move into the championship lead past his Josef Kaufmann Racing team-mate Louis Deletraz, who was back in seventh in another low-key race.

That situation changed on the last lap though when behind Jorg, Ukyo Sasahara made a move on Ben Barnicoat at Village for the final place on the podium.

In an attempt to cut back underneath the Japanese driver, Barnicoat lighted up the rear tyres and spun, falling to 13th at the chequered flag. It means the British racer failed to score points this weekend, having had cars launch off the back of his in Saturday’s two races.

Behind the duelling British Koiranen pair of Jack Aitken and Jake Hughes – who could not repeat their two podiums each from Saturday – Deletraz took sixth to hold on to the championship lead by a solitary point from Jorg. Hughes is eight points behind.

Hubert’s Tech 1 team-mate Simon Gachet took the chequered flag in seventh place but was demoted to 11th by a 10-second penalty for not respecting track limits.

That promoted Callan O’Keeffe, Dennis Olsen, FR2.0 debutant Will Palmer and Thiago Vivacqua all up a place, filling the final four positions in the top 10. Gachet does get the final point, with wildcard entrant Palmer not eligible to score.

The BRDC F4 leader did get to stand on the podium as the top rookie.