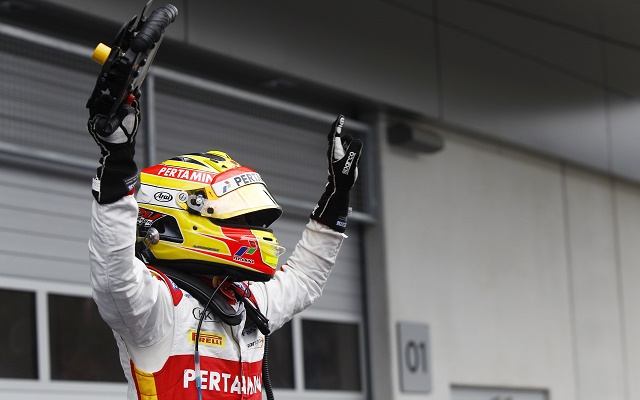 In a race similar to the first sprint of the season at Sakhir, Haryanto once again held off Stoffel Vandoorne, stopping the Belgian from securing his first double in the series.

Rookie Nick Yelloly started the race from pole for Hilmer, but his victory bid was over into Castrol Edge.

The Briton was somewhat slow off the line, allowing Haryanto to take the inside line heading into the first corner.

And, with Rossi going on the outside, Yelloly was squeezed between the two, making contact with the American. Rossi wound up down in P13, while the Hilmer driver retired from the race.

The drama up ahead allowed Artem Markelov to sneak by into second, with Vandoorne and teammate Nobuharu Matsushita following in third and fourth.

Markelov was right with Haryanto over the opening laps, the duo setting the pace out front. The Russian had several attempts at taking the lead, but while he gained time in the early parts of the circuit, Haryanto was always quicker through the more flowing second and third sector.

As the race passed halfway point, a frustrated Markelov attempted an ambitious dive on Haryanto into the inside of Schlossgold. Almost cutting the corner, he edged ahead but was never going to make the turn – and ended up going into the gravel, which cost him several places.

It was Vandoorne’s turn, then, to have a go at dethroning Haryanto. However, while the Belgian was never further off than seven tenths over the remaining laps, he was never close enough to challenge either, the Indonesian out front keeping to his lines perfectly.

With four laps to go, Matsushita and fourth-placed Sergey Sirotkin were both within a second and a half of Haryanto, but the leading group ran in formation until the chequered flag.

For Matsushita, that meant his first podium in the GP2 series.

Behind the frontrunners, Mitch Evans drove a rather lonely race to claim fifth, while Pierre Gasly led Jordan King in sixth.

Markelov denied Rossi for the final points-paying position at the line.

Saturday podium finisher Alex Lynn stalled off the line and had to settle for an eventual 21st-place finish.

UPDATE: Markelov has been stripped of his eight-place finish due to not having enough fuel in the car after the end of the race. Rossi is promoted to the final points-paying position.

Tunjo fights through to take GP3 sprint victory at Spielberg

Dennis doubles up in action-packed third F3 race at Spa