written by Valentin Khorounzhiy 8 May 2015 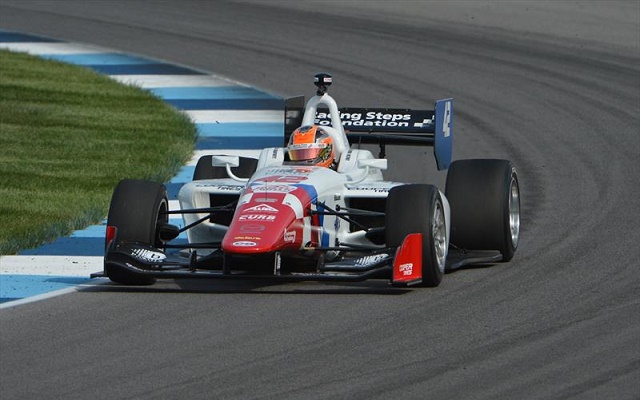 Indy Lights 2015 pre-season favorite Jack Harvey has finally claimed his first win of the season in race one at Indianapolis GP circuit.

Harvey eased to victory from pole position, finishing 4.7s ahead of the nearest rival in the 30-lap race.

The biggest threat to his dominant victory was arguably even before the green flag when he ended up out of synch with fellow front row starter Ed Jones, causing an aborted start and picking up a warning from the officials.

But he nailed the next attempt to start the race and comfortably established an early lead.

Further down the field, Juncos Racing’s Kyle Kaiser was boxed in between Belardi drivers Juan Piedrahita and Felix Serralles and ended up going around. Both Kaiser and Piedrahita were done for the day, while Serralles soon incurred a drive-through penalty.

Out front, Harvey controlled the race, keeping Rayhall at a safe distance. The 8 Star driver was simultaneously being reeled in by the Carlin duo of Jones and Max Chilton.

But neither made any inroad and it was Chilton who tried to go around the outside of Jones later in the race but couldn’t make the move stick.

As such, with Harvey delivering SPM’s first win of the year out front, prototype driver Rayhall took his first podium in Lights, while Jones kept Chilton in fourth.

RC Enerson slipped behind Scott Anderson at the start, but ended up passing his teammate later on to claim fifth.

Spencer Pigot, winner of both races at Barber, lost several positions over the opening lap, but recovered to finish seventh, ahead of Shelby Blackstock.

Ethan Ringel called it a day 16 laps in with mechanical issues, while Serralles spun around in turn one with seven to go and could not get the car moving again.