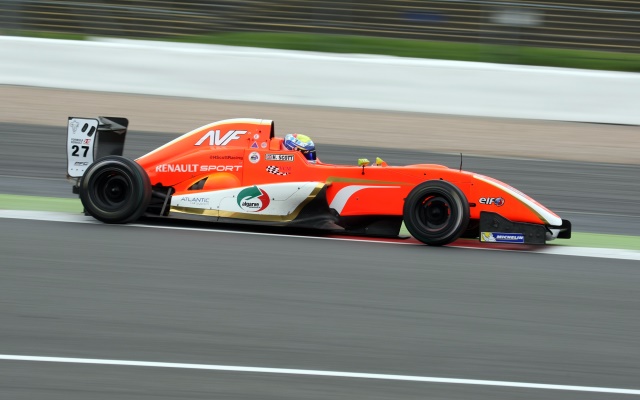 The AVF team has signed top 2015 rookies Harrison Scott and Darius Oskoui to lead its attack on the 2016 Eurocup Formula Renault season.

Scott remains with the Adrian Valles-led outfit for a second season having finished 12th overall in the Eurocup last year as the top rookie.

“I have known Adrian for many years and we built up a strong relationship last year which led to my rookie championship title,” said the 19-year-old Briton.

“I would like to thank my manager, Peter Fenichel, who has worked so hard for me over the winter.

“With Adrian and the team’s expertise in European single-seater racing, I know we have a strong chance of winning the 2016 Eurocup championship.”

Swiss driver Oskoui switches over from the ART Junior Team after finishing one place behind Scott in the 2015 Eurocup.

“We have tested once together and it went very well,” said Oskoui, who will take part in both Eurocup and NEC.

“Concerning their performance, I am confident that they will provide a car quick enough to fight with the front runners. They have experience in Formula Renault 2.0, they are determined and know their job well. The atmosphere in the team is great as well, which is always important.”

Portuguese driver Henrique Chaves will complete a three-car assault on the Eurocup after contesting the NEC with the team last year.

Joining Oskoui and Chaves in racing for AVF? in the NEC will be Nerses Isaakyan, who was third in SMP Formula 4 in 2015 and made a Formula Renault debut in the Alps round at Misano in July with Koiranen, and Julia Pankiewicz, who steps up from Italian Formula 4.