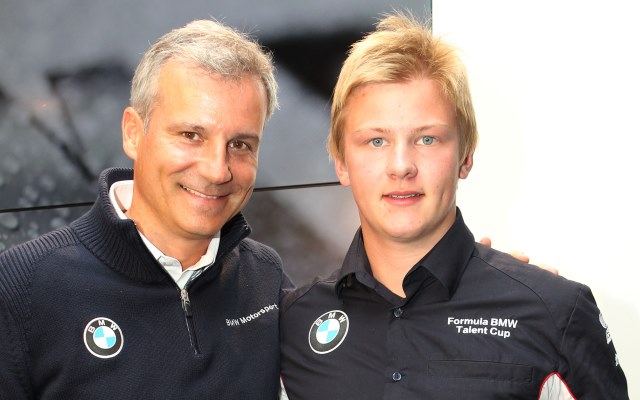 Robin Hansson has become the third winner of the Formula BMW Talent Cup after contact with rival Nico Menzel in the final race of the final at Oschersleben.

Michael Waldherr came through to win race three after Hansson and Menzel came together fighting over the lead.

After starting third, Hansson took the lead of the race and was joined at the head of the race by Menzel on lap two. The contact came on lap six when Menzel attempted an overtake but clipped Hansson’s car, spinning off and ending up in the gravel.

Hansson sustained a damaged front wing in the contact but was able to continue albeit it at a reduced pace. Having come into the race with the points lead, finishing the race in seventh was enough to secure the title.

The Swede follows Stefan Wackerbauer and Marvin Dienst as winners of the competition, and will receive funding from BMW for his 2014 season. Dienst has been racing in ADAC Formel Masters this year.

Behind Waldherr, Kaan Onder and James Allen completed the podium. Jules Szymkowiak, Florian Stuger and Bar Baruch rounded out the top six ahead of Hansson.

?It was a sensational day for me,” said 16-year-old Hansson. “I always knew that I can drive fast, as I demonstrated in the first two races. In the third race I had a good duel with Nico for the lead and also the overall victory. Nico wasn?t able to finish the race, but that?s racing. Afterwards I was forced to take stock of the situation and show what was necessary to win the 2013 Formula BMW Talent Cup. The overall victory is magnificent. The whole training experience has improved me as a driver ? and of course it was a whole lot of fun.?

Cammish closes out Rockingham round with another win