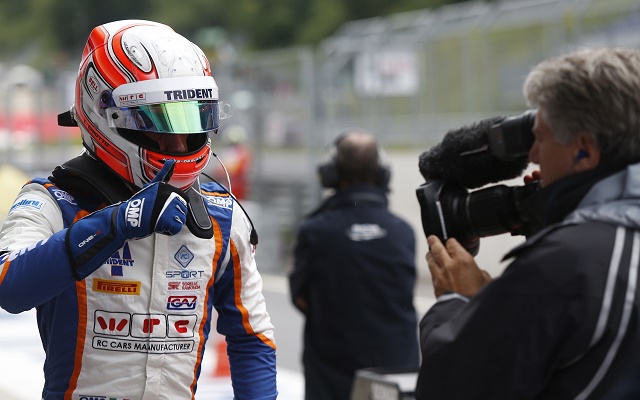 Trident Racing’s Luca Ghiotto converted his third pole in the GP3 series into a maiden win the the first race at Spielberg.

Despite losing out to Esteban Ocon at the start, Ghiotto retook the spot and never looked back again, comfortably seeing out the race.

The first green flag period of the race was over just as it started as two drivers within the top ten – Alex Palou and Mitch Gilbert – stalled off the line. Palou was avoided and actually had the time to get going again, but Gilbert did not and the Carlin driver was hit hard by Kevin Ceccon, who then collected Samin Gomez.

The plethora of debris at the main straight brought out the safety car but, amidst that, Ocon had actually gotten the jump on Ghiotto – and while the Italian was close to retaking the spot in the slipstream, the safety car prevented him from getting a shot.

After four laps of cruising, the race went back to green. Ocon nailed the restart, only to harshly compromise his momentum by running wide into turn one.

As such, Ghiotto mounted a serious challenge over the next lap, looking on the inside of Ocon into turn three and the final corner and forcing the Frenchman into a massive lockup.

The lead change seemed to be matter of time and that it was as Ghiotto tried to move past on the outside into Castrol Edge on the next lap before finally slipstreaming into the lead before Remus.

Now in clean air, the Italian, who looked class of the field in qualifying, immediately began stretching his lead and would eventually head Ocon by four seconds at halfway.

Ocon himself was running a comfortable second at that point, with teammate Marvin Kirchhofer maintaining the pace in the final podium position.

But further down the pack, the Carlin duo of Antonio Fuoco and Jann Mardenborough were on the rise, battling their way through the field.

Fuoco passed Sandy Stuvik and Emil Bernstorff in quick succession to move up to fourth, while practice pacesetter Mardenborough moved from tenth on the grid to seventh before also overtaking Stuvik.

With Fuoco then closing in on Kirchhofer, the German ran wide and let the Ferrari protege through into third place.

The Carlin driver then took very little time to catch and pass Ocon, doing so with a comfortable move into Remus.

As Fuoco took second, he was now almost seven seconds behind Ghiotto, who was comfortably controlling the race with six laps to go. The Italian briefly tried to match the pace of his leading compatriot, but then eased off, settling for second.

Ocon, meanwhile, began to drop off, his tyres seemingly feeling the effects of his aggressive defense early on.

But the same was true of his teammate Kirchhofer, who fell into the clutches of Bernstorff and Mardenborough, letting both through in the span of a couple of corners.

Ghiotto eventually crossed the line 12 seconds in the clear, with Fuoco taking second.

Bernstorff caught up with Ocon during the final laps, but ended up settling for fourth, ahead of Mardenborough and Kirchhofer.

Sandy Stuvik, Ralph Boschung and Oscar Tunjo picked up their first points in the series in seventh, eighth and ninth respectively, while Alex Fontana completed the top ten.

Kari in control in first race of Sochi weekend