Ghiotto storms past Ocon on lap one to win Sochi opener 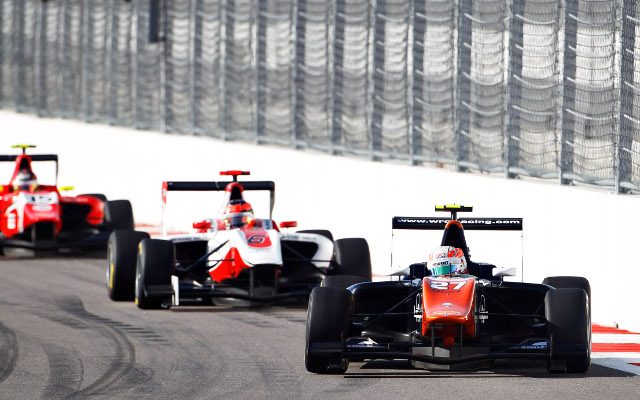 Luca Ghiotto stormed from sixth to first on an unbelievable first lap to beat rival Esteban Ocon to the win in race one at Sochi and extend his GP3 points lead.

While Ghiotto scored his fourth win of the campaign, Ocon was forced to settle for an eighth consecutive second-place finish.

After starting on pole, Ocon had actually carried a big lead into the first corner after the two drivers directly behind him on the grid, Matheo Tuscher and Kevin Ceccon, both stalled.

Ghiotto benefited from that to go through Turn 1 in third before sliding past Emil Bernstorff at the next corner and latching onto the back of a cautious Ocon.

The Italian then snatched the lead away from Ocon by diving down the inside of Turn 13.

After an early safety car when Alex Bosak collided with his Arden team-mate Ceccon at the final corner, Ghiotto was able to pull out a three-second lead over Ocon.

Ocon halved that gap in the last couple of laps as he posted the fastest lap of the race, but by then it was too little, too late.

Instead of losing his championship to Ocon has had looked likely at the start, Ghiotto has extended his lead from 10 points to 15.

Emil Bernstorff kept early pressure from Alex Palou at bay to complete the podium and remain in touch with the championship top-two, while the Spaniard capitalised on a shorter race distance to hold fourth to the end and score his best result to date.

Jann Mardenborough was passed by his Carlin team-mate Antonio Fuoco on lap one but regained fifth with a bold move after the restart, scoring points for the first time since an identical result at Spielberg in June.

Marvin Kirchhofer came back from 16th on the grid to finish ninth ahead of Artur Janosz.