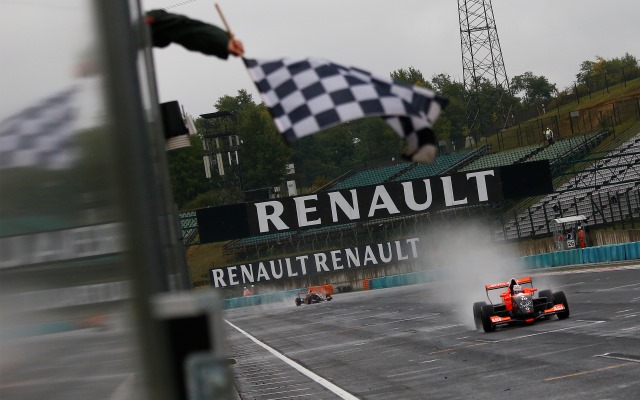 Pierre Gasly boosted his Eurocup Formula Renault 2.0 title hopes with a controlled win in a wet race one at the Hungaroring, taking the championship lead away from Oliver Rowland who lost out in a tangle with Racing Steps Foundation stable-mate Jake Dennis over third.

The race began with three laps behind the safety car, with Esteban Ocon pouncing on Rowland for second place when the race started for real. Gasly was able to edge away up front as Ocon remained in a battle with those behind him. The Tech 1 driver’s lead was up to five seconds with a couple of laps left before easing off to take a 3.4 second win over Ocon.

“Of course it was our first time [this weekend] in these conditions, it was really tricky at the beginning and Esteban and Oliver were really close to me,” said Gasly afterwards. “I had a bit of a gap after because they were fighting together and I was a bit more able to push.

“It’s really important, I think, this victory, for the championship and it’s good to see that in the rain or in the dry the car is really performing.”

Dennis worked his way past Rowland and then attacked Ocon down the inside of turn one, eventually sealing the deal a few corners later. Ocon fought back though and re-passed Dennis, who then fell into the clutches of Rowland. The two Brits ran side-by-side for several turns before contact was made at the turn eight left-hander, sending Rowland through the gravel.

Nyck de Vries capitalised to finish third and secure his first Eurocup podium since the Hungaroring meeting last year. Egor Orudzhev worked his way up to fourth from 11th on the grid while Dennis crossed the line in fifth.

Luca Ghiotto was sixth ahead of Oscar Tunjo, with Rowland slipping down to eighth in his damaged car. Bruno Bonifacio and Andrea Pizzitola completed the top ten.

Gasly’s win moves him onto 127 points, four ahead of Rowland.

Dan Cammish reigns supreme in qualifying at a damp Rockingham