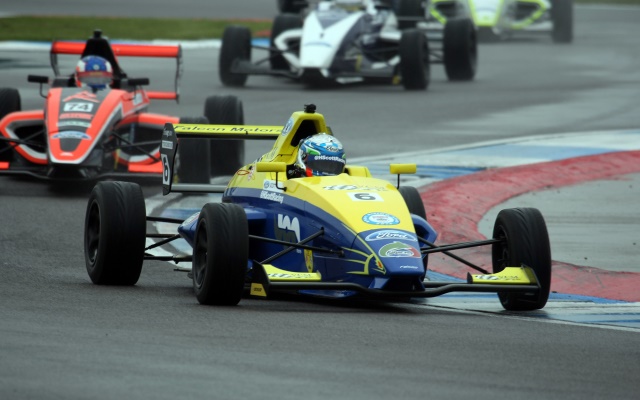 Formula Ford GB will run in accordance with the FIA’s Formula 4 regulations from 2015 onwards, it has been announced.

Ford has signed a contract with the British motorsport governing body the MSA to develop a new single-seater series in line with the FIA’s vision for entry-level championships.

A new carbon-fibre monocoque chassis will be developed to FIA F3 safety standards, and be powered by the existing 1.6-litre Ford EcoBoost engine that was introduced to Formula Ford in 2012.

Formula Ford introduced the existing spaceframe chassis in 2012, adding front and rear wings in 2013. The revised championship will continue to run on the support package of the British Touring Car Championship.

It appears that the series will not identify itself by the F4 moniker, which is already used in the UK by Jonathan Palmer’s BRDC F4 Championship.

The FIA’s framework for F4 covers technical regulations, sporting regulations, organisation standards and marketing and communication. Individual championships designate their own chassis and engine suppliers. The Italian F4 championship is the first to use the regulations, and began at Adria earlier this month with a field of 22 Abarth-powered Tatuus cars.

“We are very pleased that many months of work has brought us to the point today where we can announce our plans for the long-term future of Formula Ford,” said Gerard Quinn, Head of Ford Racing in Europe.

“We have worked closely with the MSA and the FIA, and in particular with the FIA?s Single Seat Commission President Gerhard Berger, to bring the project to fruition. The FIA has a focused objective ? it wishes to see a clearly set-out path leading to Formula 1, and has created regulations aimed at securing consistent organisational standards, technical fairness, sporting relevancy and stability. Ford is delighted to be working with the MSA and the FIA to bring those plans to fruition.”

Palmer wins again as HHC lock out the podium