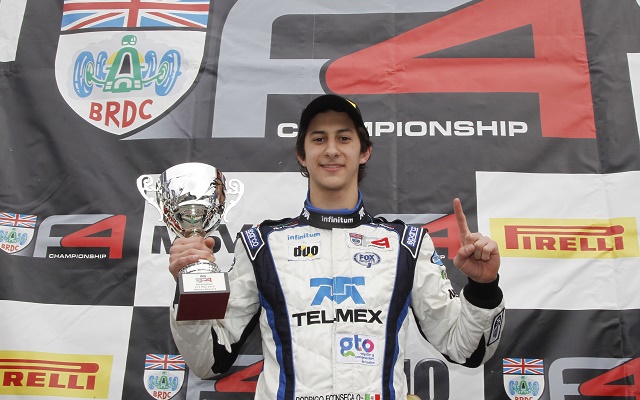 While the Mexican’s first win at Rockingham was from fifth on the grid, this time around Fonseca triumphed from 15th under wet conditions.

The front row of Hernan Fallas and Omar Ismail both kept their positions off the start, albeit the latter was soon passed by HHC’s Sisa Ngebulana.

And it took the 17-year-old South African four laps to depose Fallas as well, taking the lead.

Behind them, Fonseca was making lighting-fast progress and followed race one winner Will Palmer and Tom Jackson past the fighting duo of Ismail and Jordan Albert.

He then picked off both Palmer and Jackson on lap five, before working his way around Fallas and Ngebulana on lap six to take the lead.

The fight for the win was virtually over, but the rest of the podium positions were all to play for, with Fallas holding up a number of drivers.

After passing Palmer, CDR’s Jackson finally worked his way around the Argentinian, who then spun on the final lap.

Jackson then caught up with Ngebulana but ended up a tenth the first-time podium finisher, the duo taking the flag three seconds and a half behind race winner Fonseca.

Palmer scored good points in fourth, ahead of Albert and Harri Newey, who made it three HHC cars in the top six.