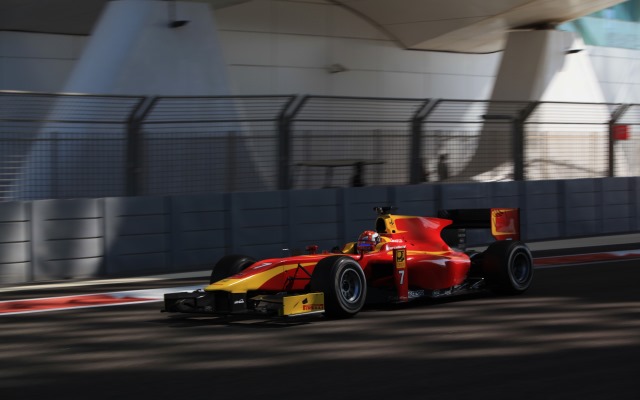 Ferrari have confirmed that they have placed Raffaele Marciello in GP2 for the coming season.

No team has yet been announced, but it has been expected that the Italian youngster will drive for Racing Engineering – who took Fabio Leimer to the 2013 title.

Marciello tested in both GP2 and Formula Renault 3.5 following his FIA F3 title success, topping sessions in both. In GP2 he tested with Trident and Racing Engineering, and looks set to race for the latter team.

Baldisserri also confirmed Fuoco’s long-anticipated move into FIA F3 to replace Marciello at Prema, and stated that karting graduate Stroll will compete in the new Italian F4 series. All three drivers will be in action in the FDA-run Florida Winter Series that starts at Sebring this weekend.

There are no two ways about it. Ferrari placing Marciello – and therefore its faith – in GP2 is an enormous coup for the series.

It has floundered recently as high costs and an abundance of experienced drivers has turned promising racers away. At the same time, Formula Renault 3.5 has come on leaps and bounds and certainly had more exciting talents fighting at the sharp end for the past two years. Think of Frijns, Magnussen and Felix da Costa, versus Valsecchi, Razia and Leimer.

Marciello was rapid testing both cars over the winter, further boosting his own reputation and meaning he was a big asset that both championships would no doubt have wanted on their books.

With the FDA’s first F1 graduate Jules Bianchi having competed in FR3.5 in 2012, the World Series by Renault’s flagship series was probably the favourite to secure his services but something has swung the deal in GP2’s favour.

Certainly, testing has proven that Marciello can be a leading contender in GP2 as a rookie – against recent trends in the series. GP2 will enable him to learn F1 tracks and workload may also come into the equation – he will be present with the F1 team on race weekends and be free the rest of the time for simulator work.

Announcements for the 2014 GP2 grid up to now had certainly failed to get many people excited, but with Marciello joining Racing Engineering and Stoffel Vandoorne set to be unveiled with ART, there will be at least two names that will draw attention to the series this year. Both could be title contenders too, which would be welcome with the bias that the current generation of car and tyre has shown towards experienced drivers, which has harmed the reputation of the talented drivers that have competed there.

This is by no means a disaster for Formula Renault 3.5. There are already plenty of talented – if lesser-known – drivers signed up for the coming season. And there are still problems with GP2 that have not been solved in an instant. But Ferrari’s preference may just have halted the series’ recent decline.