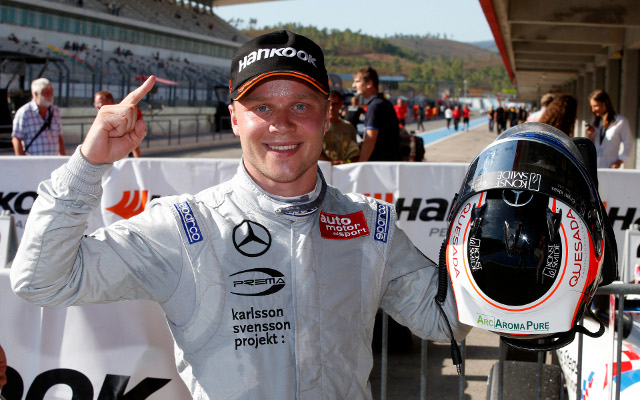 The Swedish driver made it look easy by leading a lights-to-flag race ahead of team-mates Jake Dennis in second and Lance Stroll in third, giving Prema eight out of a possible nine podium finishes?this weekend.

Though the race was slightly delayed from oil on the track from a previous event, Rosenqvist easily led the way off the line as Dennis overtook Stroll into turn one. Stroll tried to fight back around the outside of his team-mate into turn two but ultimately settled on third as the trio would not swap positions for the remaining 20 laps.

Behind them, Carlin?s George Russell was able to keep his fourth position on the grid as both Gustavo Menezes and Mikkel Jensen?messed up their starts. Sergio Sette Camara followed Russell into turn one ahead of Fortec?s Pietro Fittipaldi and the second Carlin car of Callum Ilott.

A big collision between Markus Pommer and Maximilian Gunther brought out the safety car, with Gunther flying over the back of Pommer?s car and into the gravel.

With the long safety car period over, both Charles Leclerc and Antonio Giovinazzi were able to move into the top 10 with eight and tenth respectively.

An early move from Dorian Boccolacci allowed the Frenchman to get past Ilott, only for them both to be overtaken by Giovinazzi in the process.

A relative calm hit the track as no drivers were making any inroads on each other for the remainder of the race, though black and white flags and drive-through penalties were being handed out in rapid succession as drivers continued to abuse the track limits.

Sette Camara tried to pull off a late charge to try and close the gap to Russell, but ultimately he ran out of time at the finish line.

Russell took fourth with Sette Camara in fifth, Fittipaldi hung onto sixth followed by championship contenders Leclerc and Giovinazzi. The fourth Prema car of Nick Cassidy recovered from 14th on the grid to take ninth with Boccolacci rounding out the top ten.