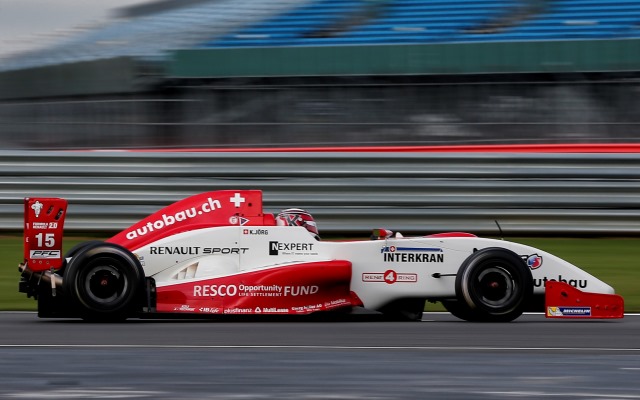 Kevin Jorg picked up his first Eurocup Formula Renault 2.0 win of the year in the second race at Silverstone, taking the lead after a fast getaway.

From third on the grid, Jorg made it three-wide with front-row men Jack Aitken and Ben Barnicoat into the first corner, Copse.

It was Jorg who emerged with the lead, although only after he had run fully off the track on the exit.

From there, he was never troubled again as Barnicoat worried about defending from those behind over the rest of the first lap.

The Racing Steps Foundation driver came under pressure from race one winner Aitken again later in the race, and lost the place when he was suddenly slow exiting Stowe corner.

That allowed Aitken and Jake Hughes past, and the two Koiranen-run Brits made the podium for the second time in the day.

Barnicoat got up to some sort of reasonable speed again to hold fourth, but a long train was building behind him.

Despite strong defending from Barnicoat, Ukyo Sasahara and Thiago Vivacqua were able to get past.

Next up behind Barnicoat was Harrison Scott, but they collided entering Brooklands for the penultimate time with Scott’s AVF car being launched over the rear of Barnicoat’s and into the gravel trap.

Dennis Olsen inherited sixth ahead of Darius Oskoui, while Louis Deletraz suffered further damage to his championship lead by finishing down in eighth.

He was worrying Hughes at one point early in the race but after being passed by Sasahara, he found himself going three-wide into Maggotts alongside Vivacqua and Scott. Deletraz ended up running off track at Becketts and fell down the order.

Deletraz’s lead is down to 10 points over Hughes and 11 over Jorg, with Aitken closing up too in fourth, 25 points behind.

Anthoine Hubert and Callan O’Keeffe completed the top 10, the former fighting back from 20th on the grid.

Bernstorff charges to victory in Monza race one