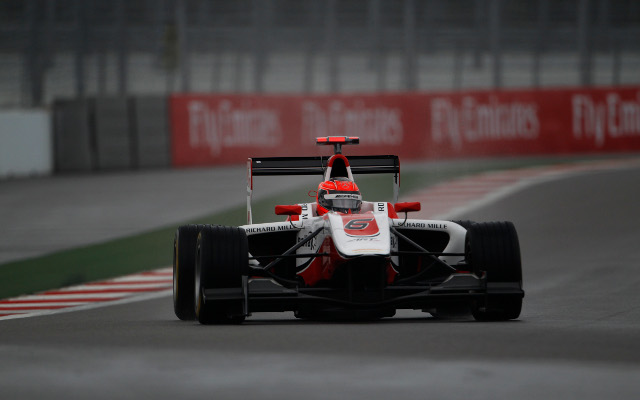 On a damp but drying circuit, the fight for pole was always going to come down to the final laps.

Ghiotto, who had claimed pole on five out of six occasions up to this point, had appeared to be in his usual form for much of the session but floundered at the crucial moment and ended up seventh.

Ocon was at the top of the times after his penultimate effort and although that was bettered by Kevin Ceccon, the Frenchman found more time on his final lap to claim pole position.

The four bonus points for pole means Ocon’s gap to standings leader Ghiotto is now down to 10 points.

Matheo Tuscher enjoyed a strong session and came very close to denying Ocon but fell four hundredths of a second short of pole at the line.

Jann Mardenborough led the way on wet tyres in the early stages but having to switch to slicks didn’t stop him from qualifying a fine fifth on his return to GP3 after stepping away to make his GP2 debut in Monza, this his first top-10 qualifying result of a challenging season.

Mardenborough could share row three with his fellow Welshman Matt Parry, though the Koiranen driver could find himself under investigation for hampering Konstantin Tereshchenko.

Behind Ghiotto were Emil Bernstorff, Antonio Fuoco and Seb Morris.

Michele Beretta got a good lap together in his maiden GP3 qualifying session to take 12th while fellow debutant Tereschchenko was consistently setting frontrunning sector times at his home event but could only manage 15th after being blocked on several occasions.

That included once when he encountered Parry and Alex Bosak prior to the final corner and the former pulled out to overtake the slow Pole and prevented the quicker Russian from coming through. Bosak had earlier badly baulked his Arden team-mate Ceccon, too.

Ocon’s team-mate and fellow title contender Marvin Kirchhofer could not pull a good lap together and finished up a lowly 16th, 2.3 seconds off the pace.

UPDATE: Parry has been relegated three-places for impeding Tereshchenko, putting him to ninth behind Ghiotto, Bernstorff and Fuoco.

Formula Renault 2.0 calendar for 2016 comes together