Joel Eriksson moves up to FIA F3 within Motopark’s ranks 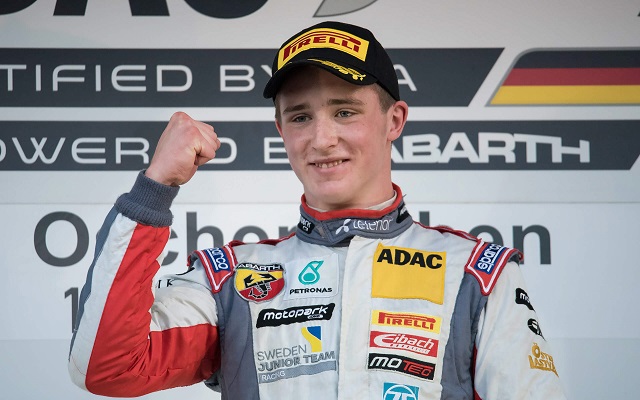 Joel Eriksson has been confirmed to enter the forthcoming FIA F3 season, continuing his collaboration with Motopark.

The 17-year-old’s debut in single-seaters was in the now-renamed?ADAC Formel Masters series, where he ended up sixth to be the top Motopark driver.

He stayed in the same series, now called ADAC F4 and, despite winning five times in the first 11 races, he finished second behind Marvin Dienst.

He then went on to test extensively with the team during the post-season.

“FIA F3 is one of the toughest series out there at the moment, and it will be a major challenge. Having said that, I did learn a lot in winter testing, and I really enjoyed the car,” said Eriksson, little brother of GP3 driver Jimmy.

“Joel Eriksson has managed a seamless transition from the Formula Four car into the F3,” reckons team boss Timo Rumpfkeil. “He impressed us big time in that he was both quick and consistent straight out of the box. I believe we can hit the ground running and fight for the Rookie of the Year award.”

Sebastian Fernandez to team up with RB Racing in Italian F4