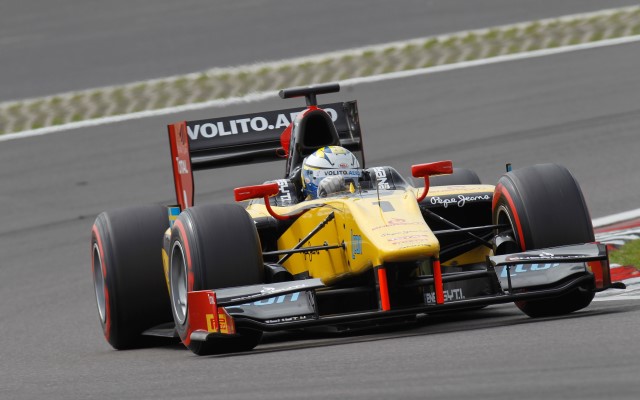 Marcus Ericsson finally brought his difficult start to the GP2 Series season to an end as he took a controlled victory in a thrilling feature race at the Nurburgring.

Ericsson began the race from alongside DAMS team-mate Stephane Richelmi on the front row of the grid, and he and third-placed Robin Frijns got the best starts to head towards turn one side-by-side, only for Mitch Evans to dive down the inside of both of them. The Kiwi ran deep however and dropped down the order, with Ericsson emerging in the lead ahead of Richelmi, while Frijns was edged down to fourth by Felipe Nasr.

Further back, Kevin Ceccon clashed with Daniel Abt as they both went for a gap off the start, the Italian then flipping in the air through a 360 degree roll before landing on his wheels and collecting the stalled car of Adrian Quaife-Hobbs ahead.

Once the safety car had been used to divert the field through the pits while the mess was cleared, Ericsson got a good jump on Richelmi at the restart. After that he was rarely troubled, regaining the lead once all the drivers had made their mandatory pitstop and taking a 7.8 second win.

Richelmi went longer into the race before stopping, and although he rejoined the circuit just ahead of Nasr, he struggled on cold tyres and was quickly passed by not only Nasr but also James Calado and Frijns – Calado having got ahead of Frijns after a slow pitstop for the Hilmer man.

Calado went on to pass Nasr and claim second place, his best result since the season opener in Malaysia. Nasr started to go backwards at this stage, with Frijns soon moving up into a podium position.

He then came under attack from Stefano Coletti. The championship leader had started 13th but went longer into the race before making his pitstop. After rejoining on fresher tyres than those ahead of him, he was able to charge past Fabio Leimer, Alexander Rossi and then Richelmi with a good move at the first corner. He then took Nasr, before chasing down Frijns in the closing stages.

Frijns put up a resolute defence, pushing the limits of acceptability in his attempts to keep Coletti behind. That came to a crescendo at the final corner of the race, with Coletti getting down the inside after Frijns compromised himself by defending hard at the chicane. Richelmi also went down the inside, and Frijns clipped Coletti ahead as he attempted to shut the door. That allowed Leimer to capitalise and take fourth at the line behind Coletti, but ahead of Richelmi and Frijns. Three tenths of a second separated the quartet at the line.

Silverstone sprint winner Jon Lancaster put in another late charge to take seventh, with Tom Dillmann beating the faltering Nasr to eighth and the reverse grid pole for Sunday.