written by Valentin Khorounzhiy 11 May 2014 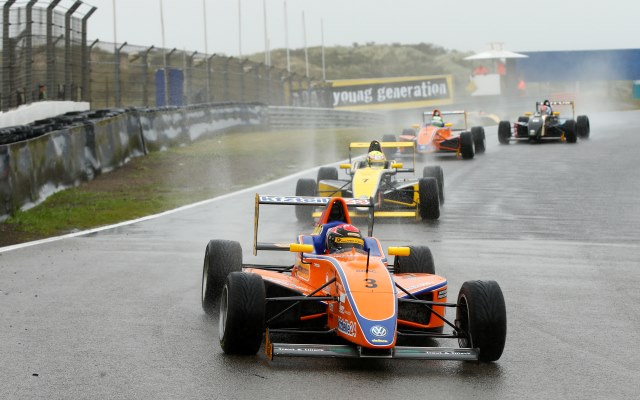 Mucke Motorsport’s 2014 signing Marvin Dienst opened up his tally of wins for the new ADAC Formel Masters season, crossing the flag in first in the reverse-grid wet race of round two at Zandvoort.

The German lined up on the second row of the grid alongside Neuhauser’s star rookie Tim Zimmermann, with Philip Hamprecht and Kim-Luis Schramm taking up the top two spots.

Both Zimmermann and Dienst worked their way around the front row starters on the opening lap, with the former assuming the lead. However, Zimmermann’s charge towards a rookie victory was dealt a blow on lap four as Dienst overtook him for the lead of the race.

On that very same lap, the safety car would interrupt the on-track action when Maximilian Gunther and Fabian Schiller went off in the gravel, the former managing to continue and the latter retiring on the spot.

Dienst led the subsequent restart, only to find himself backing up the field due to another safety car, which was brought out when Ralph Boschung, Igor Walilko and Gunther came together on the track and went off in tandem. Again, Gunther was the only one who managed to resume the race, albeit a lap down.

The final restart saw Dienst comfortably hold on to the lead as the Mucke man cruised to his second victory in the series, having previously triumphed at the Slovakia Ring in 2013.

Zimmermann finished second, making it four podiums in six races of his rookie season so far. Mucke’s Schramm completed the podium, having overtaken Mikkel Jensen after the first restart.

Jensen himself kept the championship lead with fourth, ahead of rookies Nico Menzel and Joel Eriksson. Hamprecht was seventh, while David Kolkmann, Giorgio Maggi and Gunther rounded out the finishers.

The top five in the standings is currently entirely made up of Neuhauser and Mucke cars, as Jensen leads Gunther, Zimmermann, Dienst and Schramm.