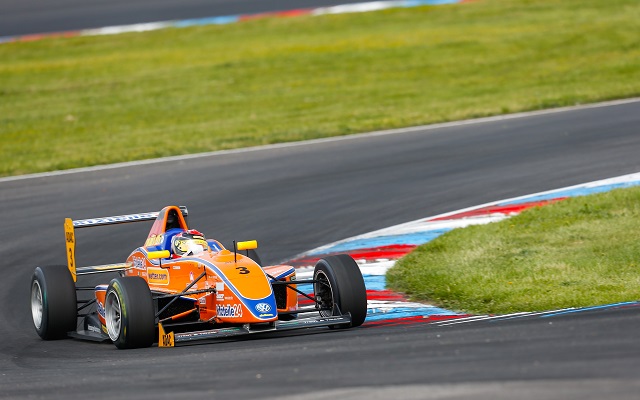 Mucke Motorsport driver Marvin Dienst was triumphant in the second ADAC Formel Masters race of round three at Lausitzring.

Having started from pole, Dienst withstood pressure from teammate Maximilian Gunther and Neuhauser Racing Team’s Mikkel Jensen over the opening laps and went on to control the remainder of the race.

The German, whose first win of the season came at the previous round at Zandvoort, was helped out by the constant battling between the two standings leader as neither of them could gain enough ground on Dienst to mount a challenge.

Gunther, who narrowly trails Jensen in the standings, managed to get the upper hand on the Dane early on despite having started from third place. Last year’s runner-up appeared to create a significant challenge for Dienst early on, but then slipped behind, allowing Jensen to catch up and pass him into turn one.

Gunther managed to keep up with Jensen and, shortly thereafter, attempted a similar move into the first corner. The Dane ended up outbraking himself when defending and ran wide through the grass, allowing Gunther into second.

Their battle allowed Dienst to pull three seconds out on them and, while both drivers managed to quickly make up a lot of time on the leader in the closing minutes of the race, they had to settle for the lower steps of the podium. Gunther held on to second despite pressure from Jensen, making it a Mucke 1-2, while the Dane maintained his standings lead in third.

Joel Eriksson ran in fourth over the first laps of the race, but soon ended up tumbling down the order, overtaken first by teammate Ralph Boschung and then by Kim-Luis Schramm into turn one. Schramm was then promoted to fourth when Boschung received a drive-through and pulled over in the pitlane, ending his race.

Philip Hamprecht secured his best finish yet ahead of Eriksson and debutant Luis-Enrique Breuer. Rookies Dennis Marschall, Nico Menzel and Tim Zimmermann rounded out the points.