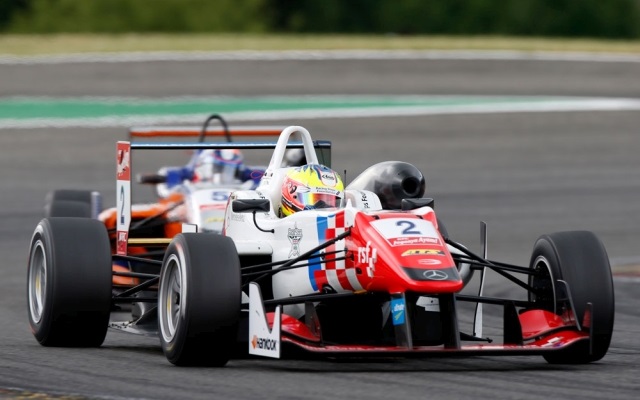 The race kicked off with pole-sitter Mikkel Jensen keeping the lead and?Lance Stroll slotting into second.

The Canadian soon claimed the lead, while Felix Rosenqvist also made his way up into third.

The safety car was brought out after an incident amongst Kang Ling, Julio Moreno and Tatiana Calderon at the Bus Stop, which left all three of them stranded on the track.

A good restart from Stroll saw him keeping the lead into turn one but Jensen and Rosenqvist closed the gap on him and they went three-wide on the Kemmel straight.

However, just as entering the corner, Stroll made contact with Jensen whose car was pushed into Rosenqvist’s, causing all three of them to retire.

As such, Dennis inherited the lead and the safety car paid another visit to the track.

The Briton stayed in first after the restart, which did not go trouble-free.

The top seven managed to get going with a massive lead under their belt as eight-placed Markus Pommer, who was sent into the pits after black and orange flags were shown?to him, slowed the rest of the field up.

However, the green flag period did not last for much longer this time around thanks to another incident between Brandon Maisano and Gustavo Menezes.

While attacking his opponent on the Kemmel straight, the American touched the grass and got launched from the rear of Maisano’s machinery.

His car landed upside down but fortunately Menezes was able to walk away, seemingly unscathed.

The race did not resume afterwards and Dennis ran away with the victory with Santino Ferrucci and Sergio Sette Camara taking second and third respectively, both of them celebrating their maiden podium finishes.

Maisano ended up fourth ahead of Signature’s Dorian Boccolacci who scored his first points of the season.