written by Valentin Khorounzhiy 24 May 2015 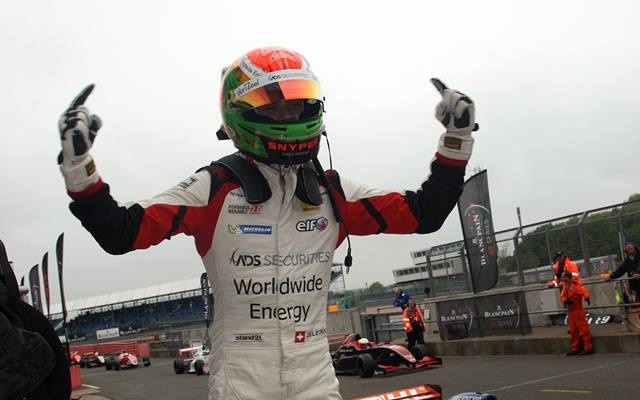 Josef Kaufmann Racing’s Louis Deletraz continued to march on in his title campaign in Formula Renault 2.0 NEC in 2015, converting his fourth pole into a third victory.

After a lengthy safety car period early on, Deletraz controlled the restart and never appeared in any real danger of losing the lead.

The Swiss leader kept the lead off the line when the lights went out, with teammate and compatriot Kevin Jorg also getting a very solid start in second. However, the early tussle for position was postponed when Nikita Mazepin and Luke Chudleigh bumped wheels and both went out of the race.

What followed was a stoppage to retrieve the stranded cars and the race only resumed at around halfway point.

Deletraz kept first, remaining on his way to lead every single lap this weekend, while Jorg was passed by Dennis Olsen.

The MP driver didn’t seem to have the pace to challenge Deletraz and instead had to focus fully on keeping Jorg from retaking position. Ukyo Sasahara and Callan O’Keeffe also joined the fight, but there would be no changes as Olsen and Jorg completed the podium.

Harrison Scott held off AVF squadmate Josef Zaruba to claim sixth, repeating his result from his NEC debut yesterday, while Max Defourny was the leading Rookie class driver in eighth.