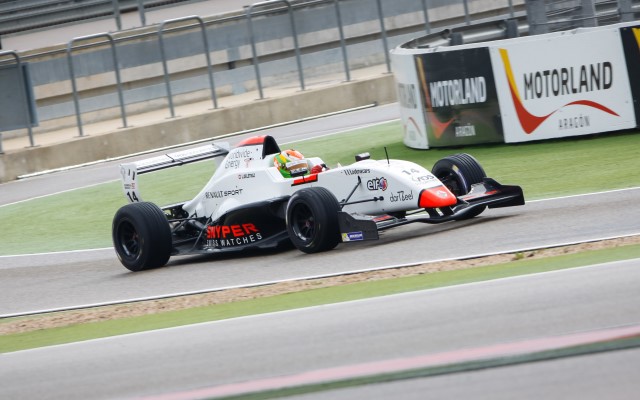 Louis Deletraz was quickest in the first Eurocup Formula Renault 2.0 qualifying session of the season, which enables him to start the first two races of the triple-header weekend at Aragon from pole position.

As usual, the field was split into two groups during the qualifying. Deletraz controlled the second session, taking the lead around the half-way point and beating the top Group A time, which was set by the Swiss driver’s 2014 NEC rival Ben Barnicoat.

As Deletraz had the best lap in the second-fastest lap classification, too, the Josef Kaufmann driver will start the second race of the weekend from pole as well.

Last year’s runner-up Dennis Olsen was just 0.01s slower than Deletraz in terms of both the fastest and second fastest times so his starting position will be third for both races.

The aforementioned Barnicoat will line up second in race one, having stolen the lead from Kevin Jorg in the final minute of the session. The Swiss will have to do with fourth despite leading Group A for the bigger part of the 15-minute-long qualifying.

Both Jorg and Matevos Isaakyan are ahead of Barnicoat in terms of second fastest laps, which puts them into the top four of the second race’s grid.

Frenchman Anthoine Hubert and top Koiranen driver Jake Hughes will start fifth and seventh respectively in both races while Isaakyan and Barnicoat take the sixth for each runnings.

Scott and Gachet will switch positions?for race two with Ukyo Sasahara starting between them.