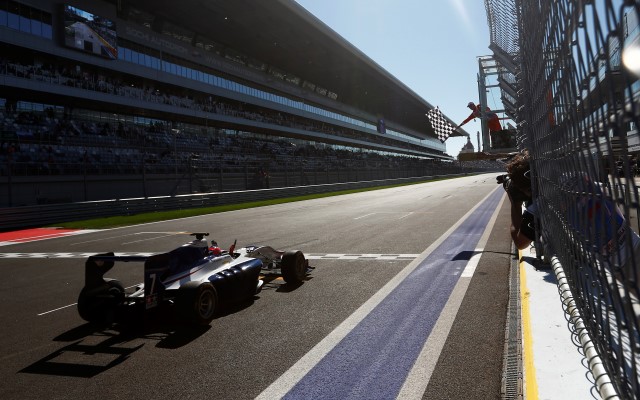 Dean Stoneman completed a perfect day in Sochi as he cruised to victory in the first GP3 race after his change of teams.

Moving to Koiranen after Marussia Manor withdrew from the trip to Russia due to commercial reasons, Stoneman claimed a dominant pole in the morning by nearly half a second, and he made a good start to the race to lead what was a frantic opening lap behind him.

Stoneman moved up to three seconds clear of second-placed Marvin Kirchhofer and showed he had pace in hand as he set the fastest lap on the penultimate lap before cruising to a 1.8-second win.

Alex Fontana recovered from a slow getaway from the front row of the grid to show strong pace on his way to a second podium of the season, battling with Stoneman for the lap record at the new track.

Jimmy Eriksson had a quiet run to fourth place, with Kevin Ceccon in fifth. Jann Mardenborough steered through the first-lap chaos to go from 11th to sixth, holding off pressure later in the race from championship leader Alex Lynn.

With Richie Stanaway failing to score points despite moving up to 12th from a pitlane start after he missed the weight check in qualifying, Lynn extended his championship to 52 points, with Eriksson now second, Stoneman third, Kirchhofer fourth and Stanaway down to fifth, with second to fifth covered by just four points.

Lynn will start on the front row of the grid for race two alongside Patric Niederhauser, and just needs to keep his points lead above 48 to wrap up the title before the final round.

Behind Niederhauser in eighth, Nick Yelloly and Pal Varhaug completed the top ten.

Sutton claims double pole for finale, Scott ahead of Kruger