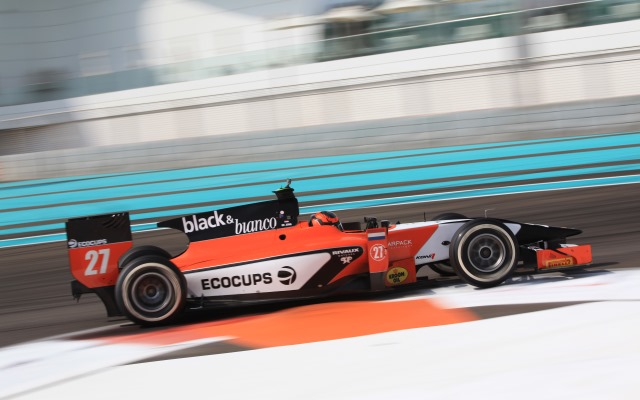 Daniel De Jong says he is aiming for regular points finishes in GP2 this year after MP Motorsport confirmed he will continue with them.

The Dutchman, whose father Henk owns the MP squad, made his GP2 debut in 2012 with Rapax and then joined up MP when they made their series bow in 2013.

He scored three points last year, with a tenth place in Monaco and a seventh in Singapore, finishing 24th in the standings.

?It?s great to be back in GP2 Series again this year and I?m really confident we can have a strong season together,? said De Jong.

?We had some good races last year, as well as some not so good ones, but the main thing was to learn as much as possible about the car, the way the tyres work and also the circuits. This year, we have to aim for points every weekend.?

MP’s second car claimed podiums in Monaco in the hands of Adrian Quaife-Hobbs and in Abu Dhabi with Dani Clos.

?We?re really delighted Daniel will be racing with us in GP2 again this year, he learnt a lot last season and with a little more luck he could have had quite a few points finishes,? said MP Motorsport team principal Sander Dorsman.

?Working with an experienced driver like Dani during the second part of last year really did help to bring Daniel on, so we?re hopeful of a strong season from him.

?As a team, we were very happy to take a couple of podiums in our first year in GP2 and the aim has to be to increase that number in 2014. It?s an incredibly competitive championship, as we always knew it was going to be, but we know we now have the team in place to be strong contenders. We will be in a position to announce Daniel?s team-mate in due course.?

A look at the new Formula 3 Brazil

Cerruti to race for Super Nova in Auto GP