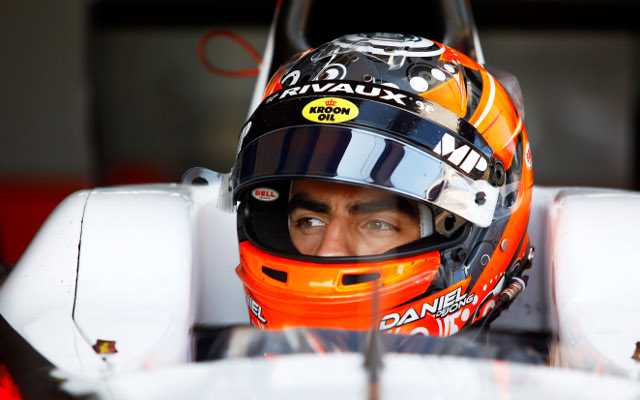 GP2 racer Daniel De Jong will make his comeback from injuries sustained in his Spa-Francorchamps crash at this weekend’s Bahrain event, driving for the Trident team.

De Jong had raced for the MP Motorsport team owned by his father since it entered GP2 at the start of 2013, but as the Dutch squad already had deals in place with Nicholas Latifi and Rene Binder for Bahrain, he will instead make his return with Trident.

A heavy crash early in the Spa feature race at Blanchimont resulted in broken vertebrae for De Jong, but he recovered in time to return to the cockpit of a single-seater in Formula 3.5 V8 testing at Aragon two weeks ago.

?I really want to say a big thank you to all of the FIA medical staff, the marshals trackside and all of those at Spa who helped to look after me so well after such a huge accident,? said De Jong.

?Of course, I?d like to say a very special thank you to Dr. [Riccardo] Ceccarelli and his team at Formula Medicine as they have helped me recover and return to GP2 much quicker than we expected.

?I had so many messages of support during my recuperation from fellow competitors and colleagues, and the GP2 organisers have been fantastic throughout.

“I really appreciate all of the kind wishes I have received and I?m really looking forward to Bahrain and being back on track.”

MP boss Sander Dorsman commented: ?We are all so happy to see Daniel back to full fitness and delighted our colleagues at Trident have been able to offer one of their seats to him.

?None of us expected Daniel to make such a quick recovery, it surprised us all so much we had the deals with Rene and Nicholas already in place for next weekend.

“It?s certainly going to be a unique experience with Daniel out there competing against the two MP cars but great to see him back.”

De Jong will race alongside Raffaele Marciello at Trident in the car occupied by Binder up until the Hungaroring round. Gustav Malja (who will drive with Rapax this weekend) took the seat at Spa before Johnny Cecotto was called up for Monza and Sochi.