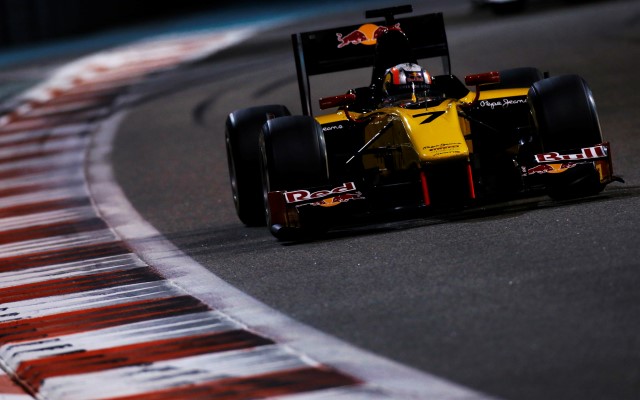 GP2 champions DAMS have announced they will run Red Bull juniors Pierre Gasly and Alex Lynn in an attempt to retain both of the titles they won in 2014.

18-year-old Gasly will join the team as expected after he spent post-season testing in Abu Dhabi with the team, being the quickest on all three days.

Gasly joined Red Bull Junior Team a year ago after winning the Eurocup Formula Renault 2.0 title. After his graduation to Formula Renault 3.5, Gasly had a storming rookie season in the championship by finishing runner-up and stepping on the podium eight times out of 17 races.

He also participated in the final six races of the 2014 GP2 season for the Caterham team, showing some glimpses of hope for the next year and giving him crucial experience.

Alongside Gasly, fellow Red Bull junior Lynn will race with the French team. He also joined the Austrian firm for 2014, after winning the prestigious Macau Grand Prix and finishing third in FIA F3. Red Bull placed the 21-year-old Briton in GP3 for the new season and a dominant start to the season allowed Lynn to take the title comfortably.

?I?m very happy to be joining DAMS which, for me, is a benchmark,” said Gasly.

“It?s the team I wanted to work with. The first tests we did together in Abu Dhabi really boosted my confidence. I felt at home in the team and I hit it off with all the guys straight away so I was on the pace from day one.

“GP2 is a very competitive championship and I know I?m going to have to do a lot of hard work. Obviously my aim is the drivers? title. I?m in the best team and I?ll have the resources to achieve this objective. I?ll also have a very solid team-mate in Alex who I know well. We get on like a house on fire and that?ll be a plus for the team. I can?t wait for the season to begin!?

Lynn said: ?I am delighted to be racing with DAMS in 2015. Their record in the last few years speaks for itself and there?s nowhere else I wanted to be in GP2 – it?s a fantastic opportunity for me and I?d like to thank them for giving me this break.

“My aim is to fight for the Championship. It?s a long time since anybody won GP2 in their first year, but if we can get off to a solid start there?s no reason why we shouldn?t be able to fight for wins and podiums straight away.

“I also know Pierre very well, we?re good friends and it?s not often that team-mates see eye to eye so I?m looking forward to having a good year with him – it will also make things a lot smoother and more productive for the team with us working together in a positive way. Bring on Bahrain.”

DAMS team boss Jean-Paul Driot added: “After the brilliant season we had in 2014 it?ll be difficult to do better! Obviously our aim is to keep our titles and I?m delighted to welcome Pierre Gasly and Alex Lynn to the team.

“It?s the youngest driver line-up we?ve ever had in GP2, but we?ve got two exceptionally talented guys who have a great future ahead of them. Although the overall level in the championship will again be very high, I?m confident that with these drivers DAMS will prove worthy of its rank.?

DAMS is the most successful GP2 team of recent years, taking the drivers’ title three in the last four seasons with Romain Grosjean, Davide Valsecchi and Jolyon Palmer and also winning the team’s title in 2012 and 2014 respectively.

DAMS is the first team to announce their full lineup for the forthcoming season, with Gasly and Lynn joining the other two drivers to have confirmed their place on the grid – Arthur Pic with Campos Racing and Julian Leal with Carlin.