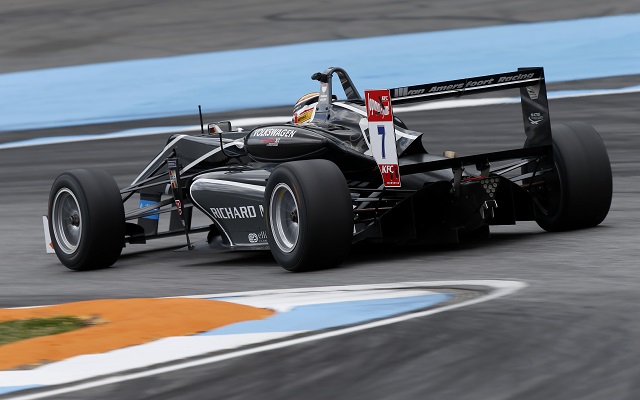 Pole-sitter Rosenqvist led after a safety car start and quickly opened up a lead of 1.5 seconds over Leclerc, but the Monegasque driver soon began cutting the gap.

He had it down to half a second by the end of lap seven, and although Rosenqvist responded over the next few laps, he soon had Leclerc right back on his tail again.

Van Amersfoort’s Leclerc – racing at Hockenheim for the first time this weekend – was close enough to tap the rear of the Prema car of Rosenqvist (seven wins from 28 previous starts at the circuit) at the hairpin on lap 12, and he ran alongside when braking for the same point on lap 13, only to run deep.

The next time around though, he got the cutback exiting the hairpin, giving him the inside line for the following right-hander and enabling him to take the lead.

The safety car then returned to the track after Pietro Fittipaldi collided with Fortec team-mate?Martin Cao?entering the Mercedes arena.

There was time for just two laps of racing at the green flag and Leclerc got a strong restart on his way to securing his second win from as many weekends in F3. His fifth straight podium, the result puts 17-year-old Leclerc within five points of championship leader Antonio Giovinazzi.

That gap would have been even smaller had Giovinazzi not been able to maintain his 100 per cent podium record so far this season, climbing up to third on the last lap.

The Carlin driver got a good start from sixth, passing Callum Ilott and Lance Stroll on the opening lap and later chasing down Maximilian Gunther, who was trying to convert a third-place starting position into a podium finish for the first time this weekend.

The German youngster held on until the start of the final lap when he spun exiting Turn 1, handing Giovinazzi third.

Jensen had passed Ferrari protege Stroll at the restart, with Ferrucci following him through but needlessly forcing the Canadian off track at the hairpin in the process.

There was then more contact for Ferrucci on the last lap when he hit the rear of Gunther entering the Mercedes arena to gain fifth. He was slapped with a 20-second penalty at the chequered flag, relegating him to 28th place.

Gunther therefore came away with his third top-five finish of the weekend, followed by Stroll, German F3 champion Markus Pommer and Jake Dennis. Alex Albon was ninth and Ilott – an early spinner at the hairpin after that contact with Jensen – took 10th.